Classic Rolling Stones! Under My Thumb

From the textmex obsessed imagination of William A. Nericcio at 2:53 PM No comments: 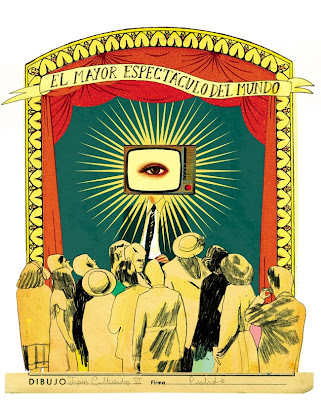 I am in the debt of dadanoias.net for turning me on to a brilliant illustrator, Sonia Pulido--I know for sure that her work will be featured in a section of my the new Eyegiene book I have just started to write for UT Press.
From the textmex obsessed imagination of William A. Nericcio at 9:59 AM No comments:

This video piece on Andrew Schneider folds together my ongoing follow-up project to Tex[t]-Mex, entitled Eyegiene, with my Fall 2008 SDSU literature/film seminar, Naked Mirrors, Fractured Souls--click the image below and through the magic of "the internets" you will be magically transported inside Schneider's daffy, brilliant head. I wish we had someone like him in our lit department! 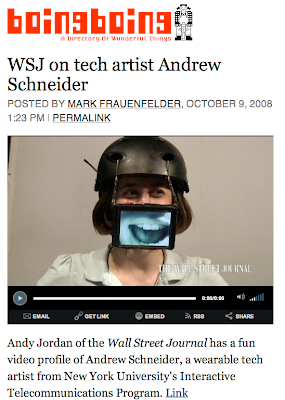 The direct video link is here.
From the textmex obsessed imagination of William A. Nericcio at 5:43 AM No comments: 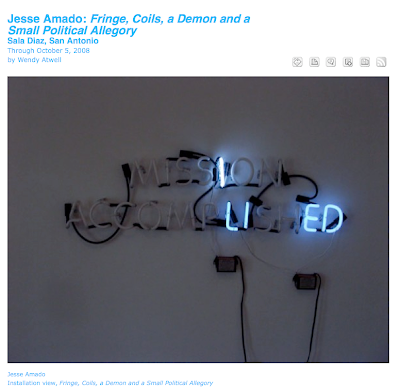 From the textmex obsessed imagination of William A. Nericcio at 10:00 PM No comments: 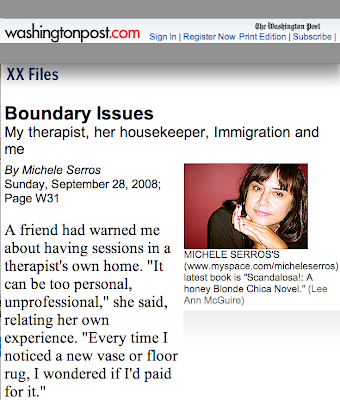 ...and Click HERE to listen to Serros's dulcet tones holding forth on Abba, Frida Kahlo and more!
From the textmex obsessed imagination of William A. Nericcio at 2:11 PM No comments:

As I was tooling around Laredo in the late 1970s, a would-be "Sicilian" lothario in an AMC Pacer (before Wayne's World made the Pacer seem retro-cool), American cinema was playing out our latest national pathology on the big screen: alien invasion. But not just any kind of invasion, this was a nightmare pathology of invasion and infiltration, the supplementation of the body by forces superior to our own--you can see this played out in Alien, (1978, d. Ridley Scott), and in the movie MCASD is screening this Thursday nite at 7pm, lensed by Michael Chapman (Bridge to Terabithia) and directed by Philip Kaufman, Invasion of the Body Snatchers. If you are in San Diego, come out and see it on the big screen! Me and MCASD film curator, Neil Kendricks, will be doing the intro, holding a raffle (can you say FREE DVDs?) and, best of all, leading the post-movie Q & A, where you get to make out like you are Siskel and Ebert and join us in a discussion of the movie. Here's a peek at the trailer: 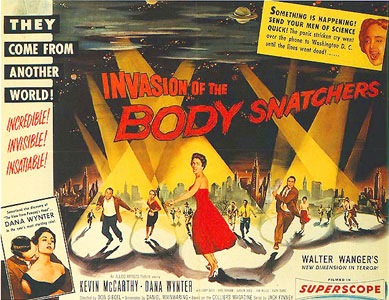 Where Don Siegel's Invasion of the Body Snatchers (1956) was a coded allegory for Cold War fears regarding ideological or political innoculation of the psyche, Chapman's 'Snatchers is more fitting for the pre-HIV, post-Nixon late 70s: here the invasion of the body by aliens from without involves a displacement not only of the psyche but of the body itself, with humans, men and women alike, as proxy wombs for the demon seed* of the other, the alien, the outsider. This reaches its allegorical heights with the infamous alien "birth" scene in Scott's alien, where a man, made "woman" gives "birth" before the horrified eyes of his fellow astronauts. Here's an extended cut of the scene from YouTube:

That what emerges in this instance, is a very phallus-like beastie, is one for the Lacanians and Freudians to mud-wrestle about. More important here, especially for films like Alien, and Invasion of the Body Snatchers, and, even, Demon Seed is this spectacle of self-penetration, this destruction of the psyche and body from without, that pulses through the fabric of the U.S. collective psyche in years more remembered for serial killer Ted Bundy (LA's the Hillside Strangler and kid-killer clown John Wayne Gacy, were also out and about), anti-British IRA attacks, and the Jim Jones, People's Temple mass suicide.

*Demon Seed (d. Donald Cammell), from 1977, positing the rape and insemination of a woman, Julie Christie, by a supercomputer, was another big screen narrative surfing this zeitgeist.
From the textmex obsessed imagination of William A. Nericcio at 3:57 AM No comments: 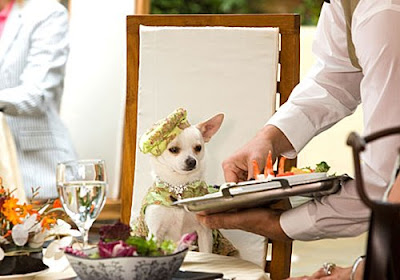 From the textmex obsessed imagination of William A. Nericcio at 8:15 PM No comments:

Email ThisBlogThis!Share to TwitterShare to FacebookShare to Pinterest
Labels: sigh

Henry Jaglom on Orson Welles in the LA Times Magazine

As I am teaching Touch of Evil next week, Monday, October 13, 2008 in my Naked Mirrors, Fractured Souls Literature and Film seminar, I thought I would provide this facsimile of a moving piece from this Sunday's LA Times Magazine by Henry Jaglom on his friend Orson Welles. It's a valuable piece of biography for fans and scholars (and students, hi!) alike. 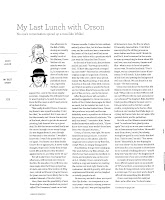 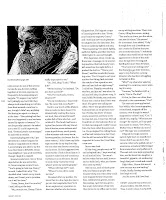 From the textmex obsessed imagination of William A. Nericcio at 9:58 AM 2 comments: 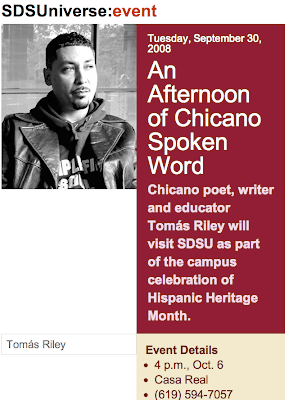 From the textmex obsessed imagination of William A. Nericcio at 5:03 PM No comments:

Ever since I saw Bruce Springsteen in an old hockey rink in Buffalo back in the day in September 1984, I have had a soft spot for this singular rocker--even before that, in the shadowed memories of 1977, when I was 16 in Laredo, Greetings from Asbury Park (1973) had grafted onto me an emotional template that's somewhere there inside me to this day. The sound is not too great in this video, but the sentiment is spot on. Color me Candide--but sometimes, amidst the fear and loathing of 8 years of Bush, Cheney, et al, you need to take a break from the irony and the sarcasm and embrace something positive on the horizon an an American tomorrow.

From the textmex obsessed imagination of William A. Nericcio at 8:13 AM No comments: