¡Ya Párale Paula! Yet Once Again, Paula Deen Pipes Up... 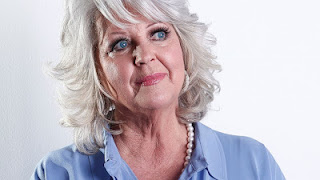 During the rubbernecking- horrific accident that won't stop, Paula Deen continues to make apologies which apologize for nothing. This time, choking back tearless sobs during the Today show, she invited people to stone her, if they have been without sin. La Deen had been a no-show, to a scheduled Today show interview, after her racist comments came out in the news. Still she decided to set the record straight ya'll. Her defenders are proud, she came out and told the world that people are just taking things out on her, and she hears African American people call each other even worse things in her kitchen. She was just being campy ya'll and can't imagine why people have so much hate in their hearts.

In yesterday's Today Show interview, Deen underscored her message of repentance with a reference the punchline of a joke: "I is what I is and I'm not changing."


There was a black guy and a white guy. They were debating over whether god was white or black. The white guy said that there was only one way to find out and that is to pray. So they go up on a hill and they pray, and pray, and pray. Finally they here a voice say, "I am what I am." The white guy jumps up, and says, "AHA I told you he was white." The black guy jumps up and says,"What do you mean? That didn't prove anything." "Yes it did, Because if he was black he would've said I is what I is."

Oh. BTW, a black man held a gun to her head during a robbery. That is the only time she has used the N-word ya'll. She was frightened!