Our newest SoCal Tex[t]-Mex Galleryblog correspondent and secret agent, the one and only diva of mass transit, Marisela Norte, weighs in with a celebrity sighting that makes egotastic and defamer look tame!

Holy snackfood batman! Said photograph's fusion of semiotic Chicano-ness and Tex-Mex cuisine is making me hungry.
From the textmex obsessed imagination of William A. Nericcio at 12:02 PM 1 comment: 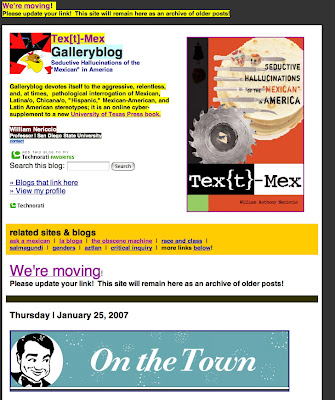 Just a reminder that the original home and archive of the Tex[t]-Mex Galleryblog is alive and well on a secure SDSU server. It chronicles, among other things, "Latina/o"-traced semiotic artifacts including Eva Longoria, Happy Feet, Speedy Gonzales gamers, Orson Welles, Rita Hayworth, "Mexican" Barbie dolls, My Name is Earl, and Lalo Alcaraz.
From the textmex obsessed imagination of William A. Nericcio at 5:04 AM No comments: 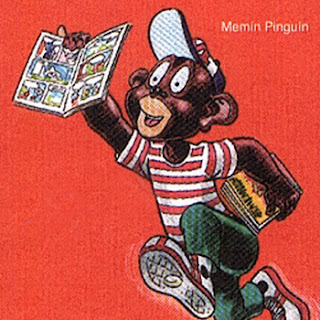 Another item I should have included in the final, "director's cut" of Tex[t]-Mex and had to omit because I found out about it too late (the book was in galleys as the controversy raged with mainstream journalists and blogonauts alike), concerns the contentious history of the very popular (in Mexico, and elsewhere) comic book hero to my right, Memín Pínguin, Afro-Mexican extraordinaire. A staple like Archie, Betty & Veronica, Little Audrey, Richie Rich, and Baby Huey (a guilty pleasure) for Mexican comic book heroes, Pínguin came to be known more widely when the Mexican government, then under the capable hands of ex-Coca Cola executive and Ronald Reaganesque politico, Vicente Fox, issued a series of stamps commemorating this redoubtable child.

What's fascinating about Memín Pínguin comics is not, in this author's view, the racist, auntjemimaesque stereotype said figure broadcasts to lascivious eyes everywhere--though indeed that is reason to pursue greater critical enquiry into his origins and popularity. More important however for our purposes and for ethnic studies work in general is the transnational perpective that a study of this Mexican boy forces on would-be semiotic/political commentators. The boy is African and Mexican, heroic and offensive, popular and embarrassing, human and facsimile--he's a comic book character after all. To be forced to speak of Memín Pínguin is to be forced to speak at once of visuo-cultural historiographies that span Africa, North and South America, just for starters.

Various journalists (some, in Spanish, and quite nostalgic), comic book fans, internet reference tools, and African American bloggers have weighed in thoughtfully on the controversy and origins of this character.

If I to have the chance to revise Tex[t]-Mex for a 2nd edition, I have a sneaking suspicion that Memín Pínguin will have a cameo role; in particular in that part of the introduction where, in attempting to gloss the intricacies of race in U.S. mass culture, I grapple with 19nth century anthropology, blaxploitation films, and the movie Mandingo in an attempt to blend the visual history of African American and Latino semiotic malevolence.
From the textmex obsessed imagination of William A. Nericcio at 3:33 AM 2 comments: