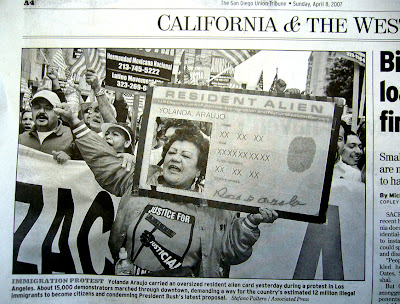 As I have been recently outed as a flaming pomo--an out and out cultural studies maven--in the international press, and as I am, as well, a card-carrying theory-doused 80s critic bathed in the flames of Foucault, Derrida, Irigaray, Sarduy, and Baudrillard, it makes total sense for me to foreground this April 2007 clipping from the San Diego Union-Tribune, featuring a photo by the Associated Press's Stefano Paltera. Paltera's lens captures a moment from Yolanda Araujo's performance art, a thrilling and innovative piece of street theatre that washes the taste of Guillermo Gómez-Peña from your synapses even as it challenges the politics of early 21st-century neo-fascism in the United States. The photo and the political act are, at once, instances of something I am beginning to call eyegiene. More on this neologism/concept (the child of Borges, Magritte, Varo, Oppenheim, Pynchon, Los Bros. Hernandez, Man Ray, and Sarduy) to come.
From the textmex obsessed imagination of William A. Nericcio at 9:16 AM No comments: 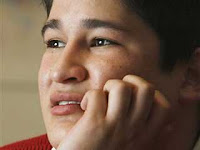 Peace to David--even the vast ocean's waters cannot wash away our memory of him and his hate-laced odyssey of a life, nor the legacies of the acts that led to this denouement. Gracias to Lázaro Lima for the update.
From the textmex obsessed imagination of William A. Nericcio at 7:03 AM No comments:

The Dearth of Worthy Chicano/Tejano Celebs 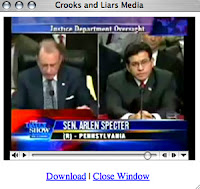 The implausible dearth of Chicana/o tele-celebrities, implausible if only for little things like the U.S. census, and the nagging and utter invisibility of Tejanas and Tejanos on the stage of U.S. mass culture (cue paean to Selena), makes the superstardom of Alberto Gonzales (who spells his last name like Speedy Gonzales, on purpose!) all the more tragic. A recent Daily Show take on our toadying, stammering, bizarro-world poster child Chicano is available from Crooks and Liars here.
From the textmex obsessed imagination of William A. Nericcio at 7:08 AM No comments: 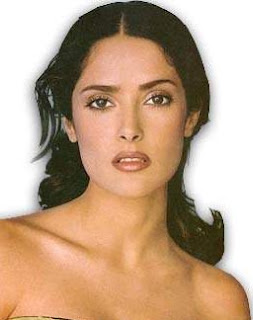 Our ace North Hollywood websleuth, Josie Nericcio, chimes in with the net revelation that Salma Hayek, my cherished Mexican superstar, may have, estilo Rita Hayworth with her year's worth of electrolysis, may have altered her Mexican physiognomy in pursuit of Hollywood fame and fortune.

Holy Joan Rivers Batmans! Stop the presses!
From the textmex obsessed imagination of William A. Nericcio at 6:57 PM No comments: 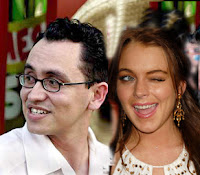 Just a quick, down, and dirty link to a recent NPR interview with Gustavo Arellano, everyone's favorite Ask-a-Mexican Chicano celeb.On another note: all rumors regarding Arellano, Lindsay Lohan, and margarita enemas are, to my knowledge, utterly false!
From the textmex obsessed imagination of William A. Nericcio at 2:00 PM No comments: