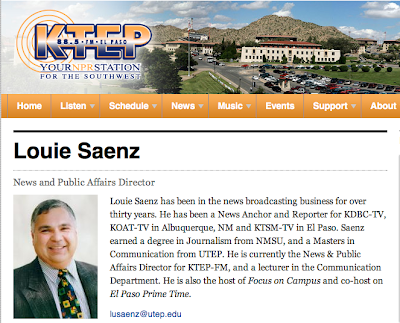 When I was at UTEP for the Mextasy exhibition a few days back, I was lucky enough to be invited on the air of the local NPR station, KTEP, with an El Paso legend, the man of a million voices (look out, Mel Blanc, you've got competition!!!!), the one and only Louie Saenz.

Big love and huge abrazos to Louie and his cool producer, Norma Martinez, for making it happen!  Here's the show in its entirety:

From the textmex obsessed imagination of William A. Nericcio at 3:13 PM No comments: 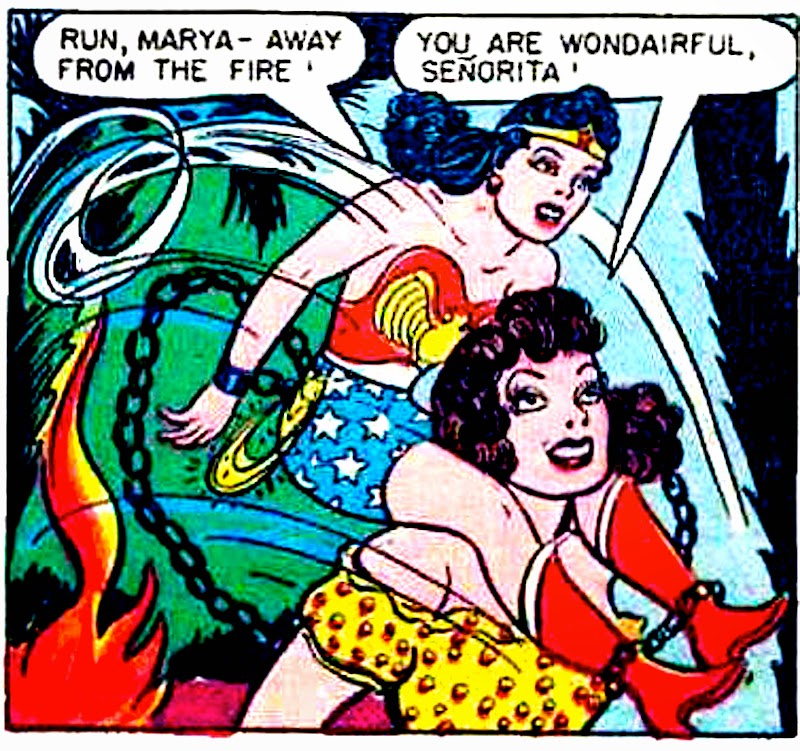 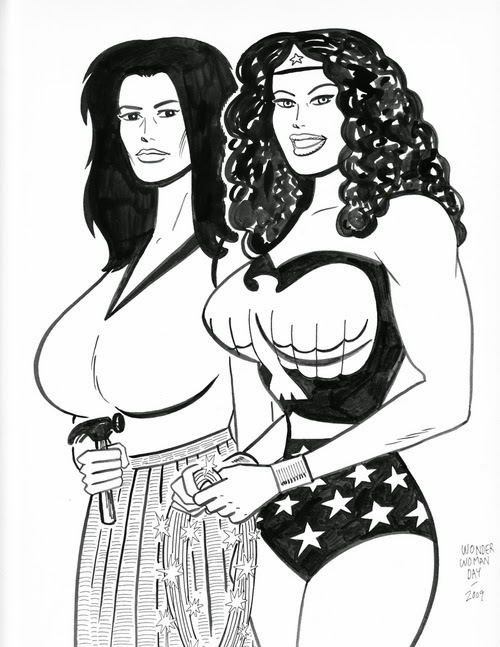 I love it when my vocation and avocation converge as they do in this wonderful comic installment on Wonder Woman from the one and only Pappy's Golden Age Comic Blogzine! An illustrator and lover of classic comics (especially Wonder Woman, Gilbert Hernandez rendering opposite, with Luba!), and a curator of artifacts focused on constructions of "Mexicans" in U.S. mass culture, rarely do I chance upon an artifact that blends these worlds (not to mention my not-so-secret fetish for fantastically strong women!).  Here's a page from the issue featuring bandit "Mexicans," Wonder Woman, freakish Mayra the giant y mucho mas more. The entire comic story here. 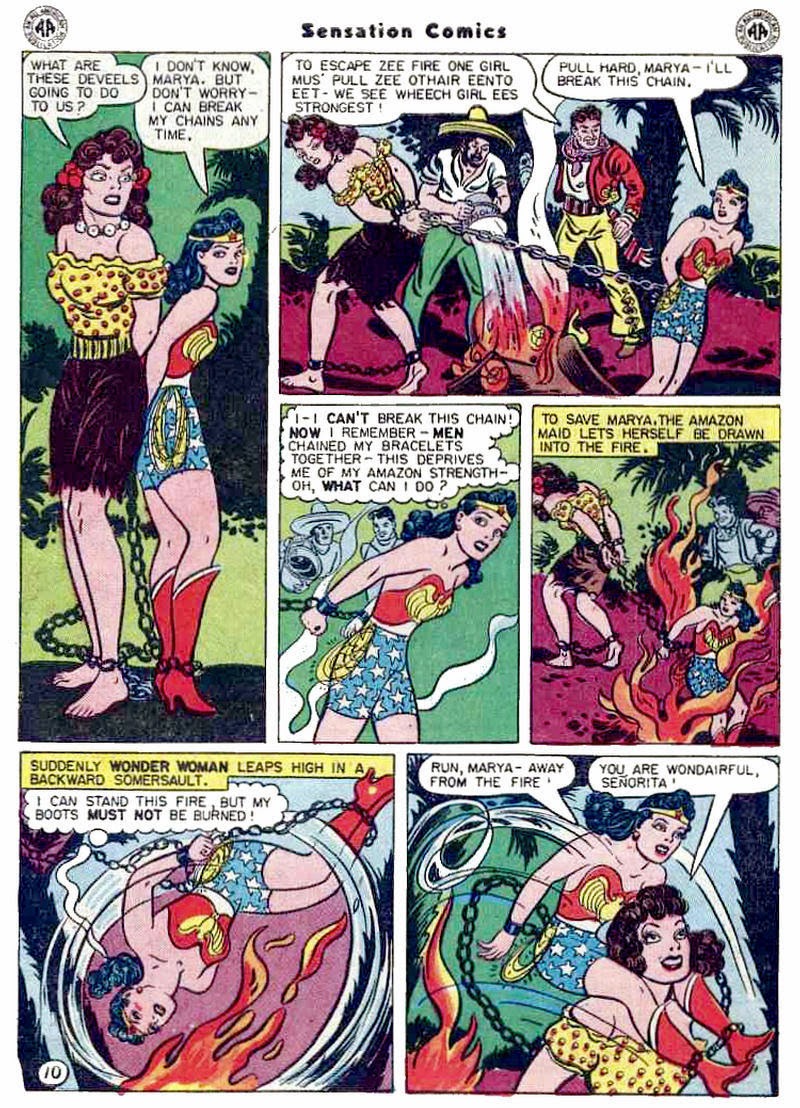 From the textmex obsessed imagination of Memo Nericcio at 9:21 AM No comments: 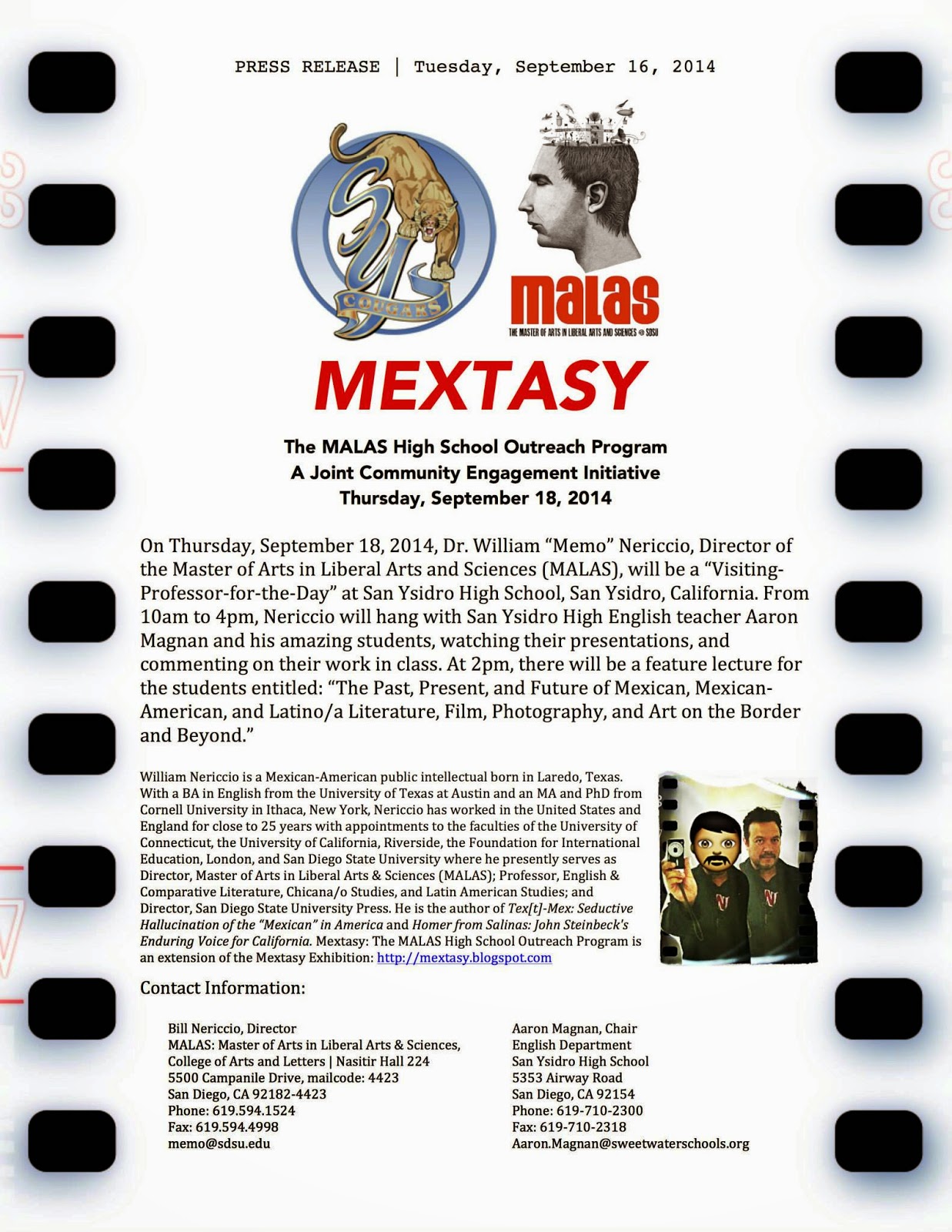 A few weeks back, I was lucky enough to spend a Friday out at San Ysidro High School, the guest of Aaron Magnan and his incredible crew of students (here's a photo album from that  day).  One of their assignments was for them to read Sandra Cisneros' "Woman Hollering Creek" short story, my essay on Laredo and the border ("What is 'Truth' at the Border" in Border Lives), and some passages on deterritorialization by Gilles Deleuze and Felix Guattari--this is no normal high school and Aaron is a one-of-a-kind teacher (and rock star).

In response to the readings, Magnan's students were charged with doing a presentation--this one, by Christian Villamea, blew my mind!  World watch out for this guy, he can write!

William Anthony Nericcio
"What is 'Truth' at the Border"

Racism has never been something new to most if not all of the people in this auditorium right now. It’s the color of our skin, the distinct sound of our names that inspire cruelty that spills out burning like lava from the lips of others. For people like me, it’s the shape of our eyes and the idea that we are much too Filipino to be considered American and much too American to be considered Filipino.
And here we see our first prime example of cultural confusion at the border. I’ve got the eyes of an Asian but the name of a Spaniard and the experiences of Levittown American suburbia if William Levitt had decided to build a subdivision down in Baja. I don’t know what to call that. I don’t know what to call myself. And then I read this essay “Remembering” and realized that even though I’ve heard the words Hispanic, Chicano, and Latino countless times before, I have absolutely no idea what to call those either.
You see, minorities often feel confused about their identities because the names that have become common for them weren’t made by them. We didn’t choose to have ourselves classified by a color wheel and split apart as if San Diego was the New World and we were the soldiers expected to fight over a mix of territory and respect.
Other people made that choice for us. Dr. Nericcio refers to those other people as “Anglo Californians;” in other words, the white majority of not only California but the U.S. as a whole. They categorized us for the sheer sake of their own convenience. They told us that who we were was a factor of the color of our skin and not the character of our hearts.
But that’s where we have to stop blaming them, because we’re the ones who committed the next big crime. We did the worst thing we could’ve possibly done in this situation:
We believed them.
And so our steps grew heavier as we felt the weight of the melanin, the pigment resting in each and every one of our skin cells, carrying us deeper and deeper until we’re six feet under a pile of broken hearts and deflated dreams.
But you know, I think we deserve that. That is our punishment for letting other people define who we are. Look down at your arms and realize that they’re the same color as the bronze medal you would earn in a contest for being yourself. And if you’re not yourself, then who are you? How can you ever hope to find your own truth at the border when truth is being beaten in a dark alley by a group of muggers that you’re not allowed to be angry at because you’re one of them?
One truth I’ve experienced at the border is that white kids have never been racist to me, at least not to my face. In fact, my best friend here at San Ysidro is white, and the ironic thing is that Mexican kids make fun of her for that. Sometimes people ask me why I’m so intelligent and I don’t really have the heart to tell them it’s because Mexican kids bullied me into a library that I spent most of my preteen years in because of their stereotype that that’s where Asian kids belong.
But I’d be willing to forgive all of that. I forgive the kids that make my best friend cry at night. I forgive the kids that made sure I never had real friends until halfway through seventh grade. I even forgive the kid that asked me if I was going to bomb him and his family because obviously being Asian means you have a family history of kamikaze pilots.
It’s not your fault. That’s what I was trying to get at earlier. You didn’t choose a life where you would have to feel burdened by something as simple as who you are, or what parents you were born to. I get it. We grow up so used to racism that it becomes normal for us, and because other people have been racist to us so often, we feel that it’s just normal to be racist as well.
What I am not willing to forgive is if you hear these words right now and still choose to believe that a life where you cannot be proud of who you are is a life of normalcy. What I am not willing to forgive is if you hear these words right now and still choose to believe that it is okay to hurt other people simply because other people have hurt you before.
We must work together to wipe this stain of racial vulgarity off the face of this otherwise beautiful city. We must not pay our pain forward or back, but rather transform it into a lesson to be preached into the hearts and souls of our neighbors who suffer beside us. We must remind ourselves that it is not normal to be ashamed of who we are. The color of our skin, the shape of our eyes are not burdens for us to shoulder; they are merely footnotes to the novels that lay within our hearts.
We must embrace who we are. Only then may we work to find our own truths at the border.
Thank you.


From the textmex obsessed imagination of Memo Nericcio at 4:10 PM No comments:

No new posting today--merely, here linked for your convenience, a recap of postings of the most famous Latina undergraduate to NOT graduate from San Diego State University, Jo Raquel Tejada, or, as you may know her, Raquel Welch!

In her honor, here is a new promo-poster for the upcoming 2015 Dallas Mextasy show!


From the textmex obsessed imagination of Memo Nericcio at 6:21 AM No comments: