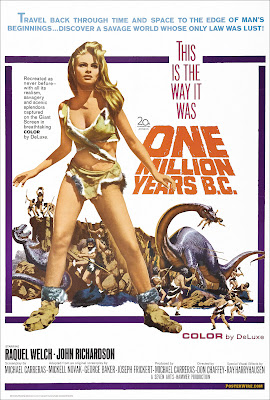 San Diego State University alum* Raquel Welch (née Jo Raquel Tejada), star of One Million Years B.C., and a regular on the Textmex Galleryblog appears here on the right. I love the way Wikipedia chronicles her memorable film work: "One Million Years B.C. is a 1966 British adventure/fantasy film in DeLuxe Color starring Raquel Welch and John Richardson, set in a fictional age of cavemen and dinosaurs. The film was made by Hammer Film Productions, and was a remake of the 1940 Hollywood film One Million B.C.. It recreates many of the scenes of that film (such as one in which an allosaurus attacks a tree full of children). It was marketed with the taglines "Travel back through time and space to the edge of man's beginnings...discover a savage world whose only law was lust!" and "This is the way it was". Location scenes were filmed on the Canary Islands in the middle of winter, in late 1965. The film was released in the United States in 1967.[2] ¶Like the original film, this remake is largely ahistorical. It portrays dinosaurs and humans living together, whereas, according to the geologic time scale, the last dinosaurs became extinct roughly 65 million years BC, and Homo sapiens (modern humans) did not exist until about 200,000 years BC. Ray Harryhausen, who animated all of the dinosaur attacks using his famous stop motion technique, has stated that he did not make One Million Years B.C. for "professors" who in his opinion "probably don't go to see these kinds of movies anyway" (this was a comment he made for the DVD of the 1933 version of King Kong)."

Here's an interview with Welch on her work on the movie:

*She never graduated, but who is counting?
From the textmex obsessed imagination of Memo Nericcio at 8:13 AM No comments: 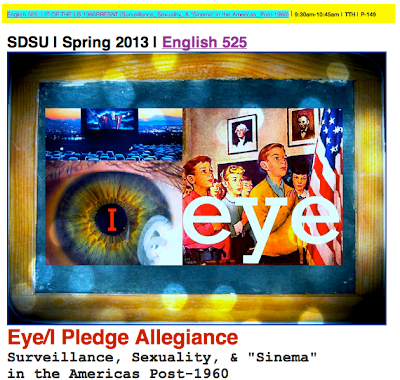 From the textmex obsessed imagination of Memo Nericcio at 2:00 PM No comments:

Border Patrol Invasion and Metamorphosis (or Metastasis) at la Frontera 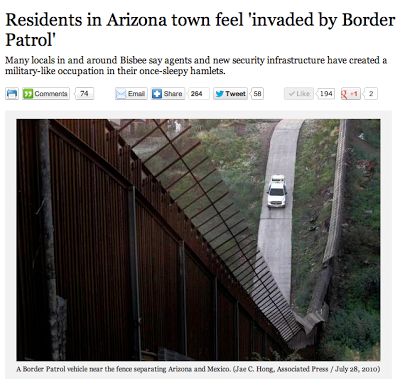 From the textmex obsessed imagination of William A. Nericcio at 12:56 PM No comments: 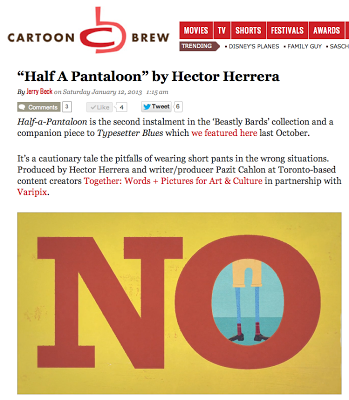 From the textmex obsessed imagination of Memo Nericcio at 9:32 AM No comments: