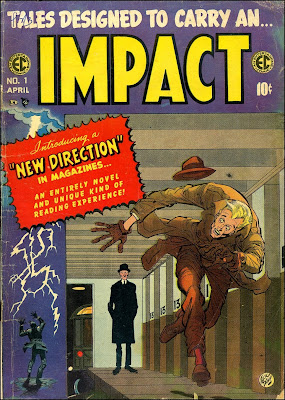 Part One; Part Two. Comments soon.
From the textmex obsessed imagination of William A. Nericcio at 11:20 PM No comments: 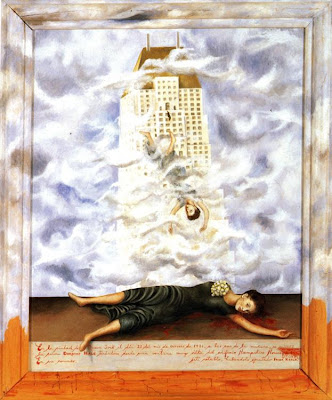 I am that one guy (a silent majority) who just did not dig Salma Hayek's Frida Kahlo biopic--I call it Diego Rivera's Movidas to my friends and anyone who will listen to me not because I am not a fan of Kahlo (I love her, like every self-respecting Chicano should) or because I loathe Salma Hayek (my homage to her secretly lurks among the pictures uploaded with my book on Amazon (holy positioned bottle, Batman!)..... more soon..... blog in process...

link to story: http://www.nybooks.com/articles/21350
From the textmex obsessed imagination of William A. Nericcio at 6:22 PM No comments:

Libreria Martinez en Santa Ana: Help if You Can, Buy a Book... 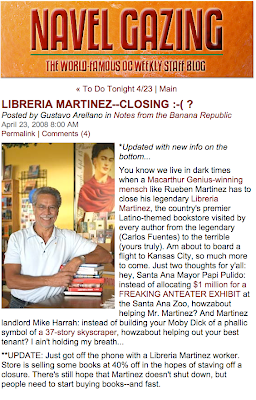 Bookstores are not yet a dying breed--witness the growth in the last decade of Costco-style behemoths like Borders, and you know the widely touted myth of the "death of the book" has been exaggerated. Here at SDSU in San Diego, we have over 700 English and Comparative Literature majors and, the dioses willing, more in the future, even with the budget axe waving like a Texas Chainsaw Massacre revival.

All that said, bookstores (especially independent bookstores) are a rare, special species. Imperfect, invaluable, and all too rare, they are also almost always IMPOSSIBLE to resuscitate and restore. So do yourself a favor if you are in and about Santa Ana: visit Libreria Martinez, prowl around, buy your regalos de navidad early (Santa's droppings, the translator), and help maintain the cultural richness of the real OC--I recently toured the area through the eyes of local historian and smartypants Gustavo Arellano and left convinced that this is one beautiful, thriving, pulsing, and priceless cultural space.

In honor of independent bookstores everywhere, I redid the web gateway for our English and Comparative Literature department--take a look! 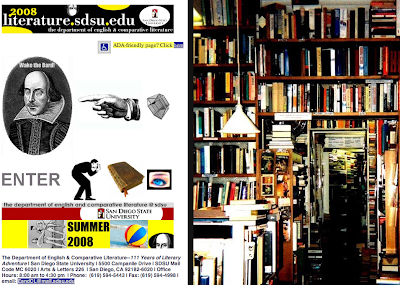 From the textmex obsessed imagination of William A. Nericcio at 9:52 AM No comments: 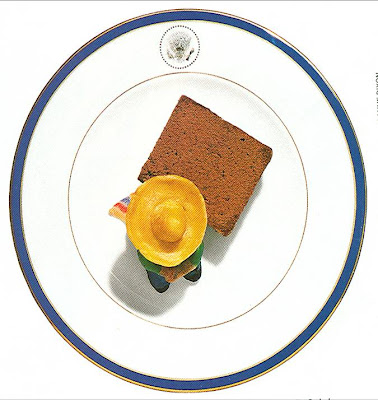 A quick referral to Maribel Alvarez's new Sleeping Mexican site for meditations on the cultural consquences of Latina/o tchotchkes!
From the textmex obsessed imagination of William A. Nericcio at 12:10 PM No comments: 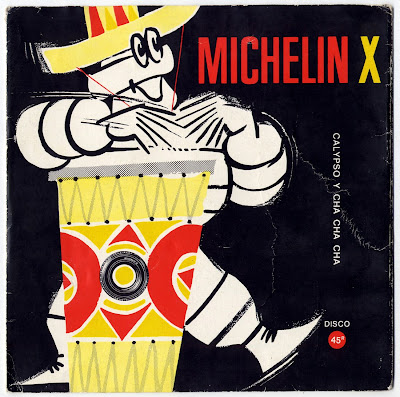 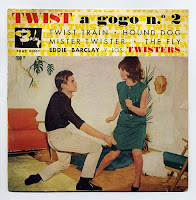 I am such a sucker for these cool, late mid-century artifacts--gorgeous design; the eyegienically blessed collector at this flickr site is to be hyped and lauded!
From the textmex obsessed imagination of William A. Nericcio at 11:52 AM No comments:

The rise of immigrant-loathing, ethnic-hypochondriac, fascist pundits like Lou Dobbs (Mexicans have Leprosy!) and Glenn Beck (Burn Mexicans as gasoline) is fueling*, pardon the pun, not only a rising wave of anti-immigrant, anti-Mexican hate, it is also, remarkably, helping fine tune a rising wave of Jonathan Swift-style satire. Lalo Alcaraz is our head Chicano artist "Gulliver" in the cause!

*source
From the textmex obsessed imagination of William A. Nericcio at 7:39 AM No comments:

Lick a Stamp and Honor our Fallen Chicano Scribe!

Ruben Salazar, RIP, again--another sordid tale of anti-Mexican sadism in the Southland. Here's a great piece on Salazar and the spectacle of his death by Edward J. Escobar from The Journal of American History.* 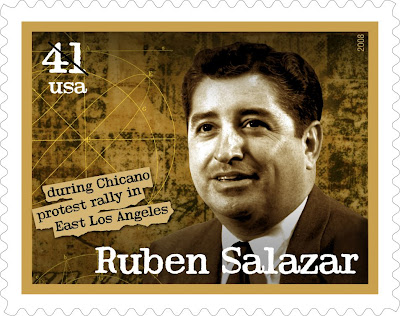 check out Adolfo Guzman-Lopez's KPCC piece on Ruben Salazar today! Other diverse, fine pieces of XicanOsmotic radio-work, aural dulce, by the once Taco Shop Poet can be found by hitting this link. Speaking of TSP, if you are in and around Mesa College Cinco de Mayo, drop by and represent!
From the textmex obsessed imagination of William A. Nericcio at 12:17 PM No comments: 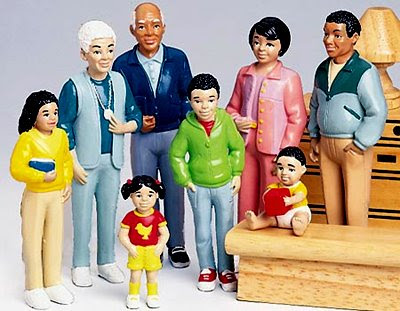 I get to lecture the genius minds of the young folks at High Tech High in Point Loma here in San Diego today at the invitation of Manuel Paul Lopez, poet extraordinaire; the presentation has the working title of "Manufacturing Humans" and is a blend of materials from my Ethnic Mannequins graduate seminar and my Obscene Machine undergraduate class from 2007. To the left? An example of a "Mexican" mannequin (and, like Data, on Star Trek: Next Generation, utterly aware of her conundrum; like Pinocchio, too).
From the textmex obsessed imagination of William A. Nericcio at 8:02 AM No comments: 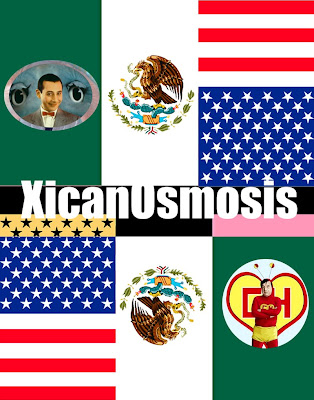 From the textmex obsessed imagination of William A. Nericcio at 7:26 AM No comments:

Email ThisBlogThis!Share to TwitterShare to FacebookShare to Pinterest
Labels: xicanosmosis

New Oliver Mayer Collection is Out and Available on Amazon! 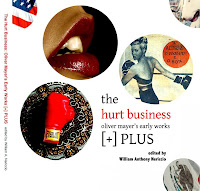 I am very excited that the volume of works by LA Playwright Oliver Mayer, The Hurt Business: Oliver Mayer's Early Works [+] Plus, that I edited is out and available on Amazon.com. The anthology has the full scripts of Blade to the Heat, Young Valiant, and Joy of the Desolate, in addition to critical essays by Howard Stein and Jorge Huerta and interviews, photographs, poetry, and theater ephemera from Mayer's private collection. More on the book is available here. 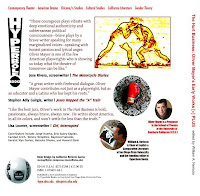 Mayer's work embodies the XicanOsmotic throbbings I began documenting in the final pages of Tex[t]-Mex, mixing, breeding, fusing aesthetic dramatic traces from Latin America, Mexico, the United States, and beyond. Mayer's blend of eros, violence, machismo, macha divas, show business, and Chicano angst are hard to beat. He really is one of our unique American writers.

Check it out if you can!

If you are travailing in academe and would like to review the book for a journal just send me an email the next time you get a chance and I will work with our crack staff at Hyperbole Books to see that you get a review copy! You can peek at the first 31 pages or so here! ¡Gracias!

If you are reading this and live in the Bay Area, make your way over to Thick Description for its revival of Blade to the Heat, now in production. Here's a quick take on what's presently going down Thick! Lastly, pay no attention to rumors you might have read concerning Madonna and the film version of Blade'--for the moment, at least, she is pursuing other pieces.

From the textmex obsessed imagination of William A. Nericcio at 4:04 PM No comments: 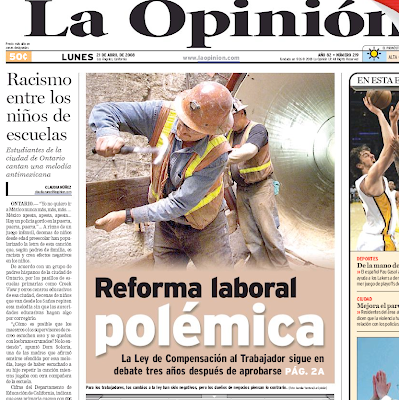 Los Angeles County-beat reporter Anabel Weekly tips me to an impossible to read online story that is, of course, a must-read online story about kids learning anti-Mexican rants to catchy melodies in Ontario, California. The story is here--click on La Opinion as it comes around.
From the textmex obsessed imagination of William A. Nericcio at 1:51 PM 1 comment:

Update to my Posting on Mr. Toledano 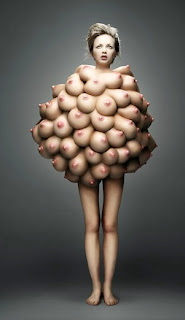 Diva Profe of Cabaret and more Laura G. Gutiérrez writes in from Tucson (can you say, Hotel Congress? I knew you could) to update my recent posting on the eyegienic art of "Mr. Toledano." She writes:

From: lgutierrez
To: Bill
Subject: Astrid

p.s. billy, check out the last video clip on the video bar on the right with Astrid--she's singing "la milonga del mono", but check out the outfit...your posted pic of toledano reminded me of astrid's dress!!

So dear readers! Who came first? Toledano or Hadad!


From the textmex obsessed imagination of William A. Nericcio at 12:02 PM 2 comments:

What All the Best-Dressed Are Wearing This Cinco de Mayo 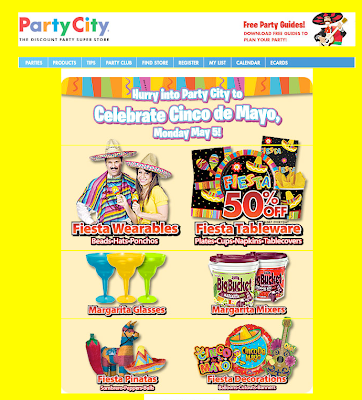 Ace Fullerton-based Cultural Studies detective, Profe Alexandro Gradilla, writes in to tip our eyes to the costume possibilities that await us at Party City--channel your inner "Mexican" and strut the streets in style! Órale!

Are you ready for Cinco de Mayo? I guess it is a new tradition to dress like a Mexican…I was going to wear jeans and a button down shirt…

From the textmex obsessed imagination of William A. Nericcio at 8:25 AM No comments:

My new carnal, University of Houson Historian Raúl A. Ramos, holds forth with a brilliant posting in The Houston Chronicle wherein he waxes eloquent on vodka, Mexico, and the history of Wars between Mexico and the United States. Helan går
From the textmex obsessed imagination of William A. Nericcio at 1:52 PM No comments: 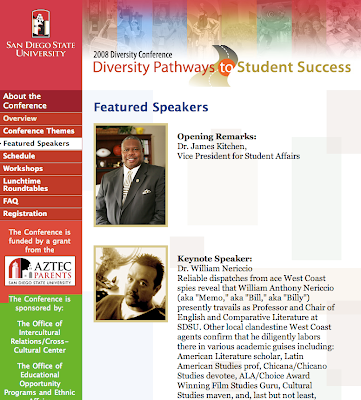 Just a quick note that I am keynoting a student conference Saturday morning at SDSU. The Conference is sponsored by: The Office of Intercultural Relations/Cross-Cultural Center, The Office of Educational Opportunity Programs and Ethnic Affairs, and The SDSU Center for Leadership Career Services--the full schedule is here.
From the textmex obsessed imagination of William A. Nericcio at 8:27 AM No comments: