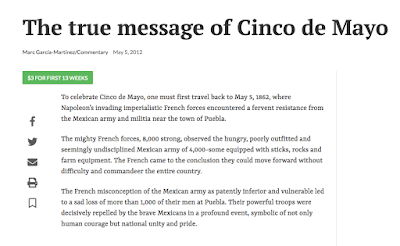 
or peek below the picture...

To celebrate Cinco de Mayo, one must first travel back to May 5, 1862, where Napoleon’s invading imperialistic French forces encountered a fervent resistance from the Mexican army and militia near the town of Puebla.
The mighty French forces, 8,000 strong, observed the hungry, poorly outfitted and seemingly undisciplined Mexican army of 4,000-some equipped with sticks, rocks and farm equipment. The French came to the conclusion they could move forward without difficulty and commandeer the entire country.
The French misconception of the Mexican army as patently inferior and vulnerable led to a sad loss of more than 1,000 of their men at Puebla. Their powerful troops were decisively repelled by the brave Mexicans in a profound event, symbolic of not only human courage but national unity and pride.
Thus May 5th presents itself not as the obligatory, cheery fiesta most think it to be, but as a compelling narrative and an exquisite metaphor.
The original incident occurred as an act of war, but the body of the defending army — which was wrongly considered anything but capable of resisting — might as well represent the collective body of our local college students who are currently in the challenging throes of educating themselves, of working in the classrooms to prove something beyond grades, of bettering their present and perhaps unforeseen situations at work while taking care of their loved ones at home.
To these students, I say forget the partying on Cinco de Mayo, for such a holiday instead offers you insight into the ways a people and a community are oftentimes wrongly viewed and mistreated.
Cinco de Mayo tells a tale of how most of our leaders are hard-hearted to the pain and injustice caused by the cruel values of military supremacy and economic imperialism. A tale where most leaders are insensitive to the sting and distress caused by severe education funding cuts, while ignoring tuition hikes. A tale of the way most leaders reveal how numb they are to the fear and indignity caused by legislation to raise the interest rates on student loans, or to abolish affirmative action as well as ethnic studies programs.
Cinco de Mayo is occurring all around you, all the time, and so as the French’s misconception of the Mexicans as unskilled, ineffectual or vulnerable, most of our leaders who make decisions regarding your academic, social and personal lives are also guilty of a kind of misconception about you. This misconception is huge, and it is unfair. You must ask yourselves what you should do to stand up against the dreaded decisions they all-too-conveniently and unilaterally make about your collective future.
And if you insist on celebrating this holiday on a social, trivial or alcoholic level, that is fine. Just be sure you make it back to class on Monday and refocus your efforts to end the spring term with hard work and honor.
But also celebrate the amazing story that is Cinco de Mayo — a remarkable and moving real-life legend about a people and a community tired of being pushed around. It is a legend about libertad, about truth vs. stereotype, and about imperial occupation of the world and deceitful occupation of the mind.
Indeed, there can be another "battle" of Puebla here in Santa Maria, and beyond, when we all realize that such affronts, invasions and occupations of the mind must be met by a drive to question such occupation, to reject the rhetoric and overcome it to achieve a livable degree of justice and dignity.
Beyond the stereotypes is the welcome hope that Cinco de Mayo truly brings to all of us.

Marc García-Martínez is an Associate Professor of English at Hancock College.

From the textmex obsessed imagination of Marc García-Martínez at 12:30 PM No comments: 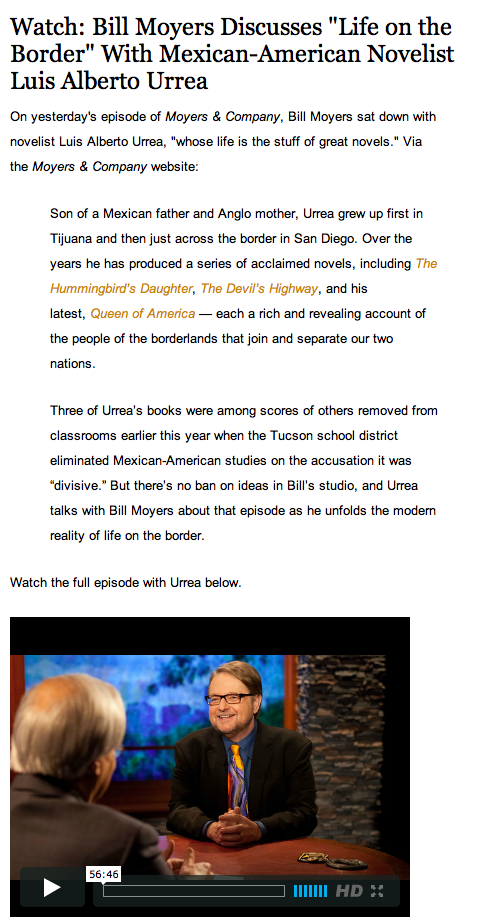 Thanks to ace UCSD Visual Studies profe Ricardo Dominguez for tipping me to this video via facebook. Here's the video direct:
From the textmex obsessed imagination of Memo Nericcio at 1:43 PM No comments: 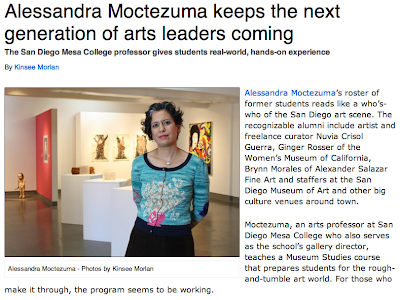 Thanks to MALAS genius Leticia Gomez for the linkazo...
From the textmex obsessed imagination of Memo Nericcio at 12:01 PM 1 comment:

Cheech of Cheech and Chong Fame Waxes Ontological! What is a Chicano? via the Huffington Post 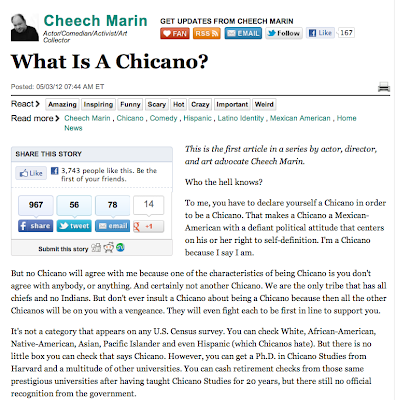 From the textmex obsessed imagination of Memo Nericcio at 10:29 AM No comments: 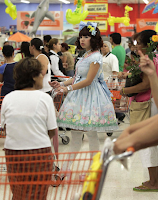 How does cinema touch the psyche? Mold the body. Ostensibly a medium that mimics or "represents" reality, cinema remakes the cultural space we inhabit even as we walk through it. Less oxygen than dna (imposing a biological metaphorics of being), Film and film culture permeates the psyche and the socius, the mind and the body politic, even as we shop at the mercado... perhaps especially as we shop the mercado...

My seminar at SDSU this term, American Panopticons, has been tracking the viral spread of cameras, film, and more this semester; the always already brilliant Xeni Jardin is all over this in a brief Boingboing.net posting: 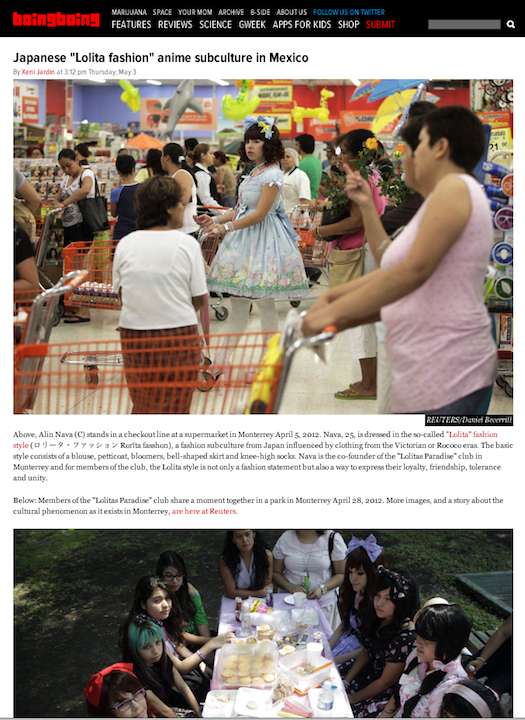 More here via the Daily Mail...

From the textmex obsessed imagination of Memo Nericcio at 6:32 AM No comments:

I May Have to End my Catalogue of Bizarre Caucasian Artifacts

Regular visitors to The Tex[t]-Mex Galleryblog know that my lifelong pursuit of horrendous "Mexican" stereotypes gave birth recently to peculiar para-pathology: my decision to begin a collection of bizarre caucasians from American mass culture. I have to confess, however, that my good natured, tongue-firmly-in-cheek curatorship may need to end or, at the very least, go on hiatus, owing to the peculiar tale of the woman in the tanning shop: New Jersey "tanning mom" Patricia Krentcil, news-photo opposite. Read the tale here, or watch the video feed below.

Ack!
From the textmex obsessed imagination of Memo Nericcio at 7:14 PM 1 comment:

Haters Gotta Hate (and Massacre): Anti-Mexican Loathing and the Cult of American Violence 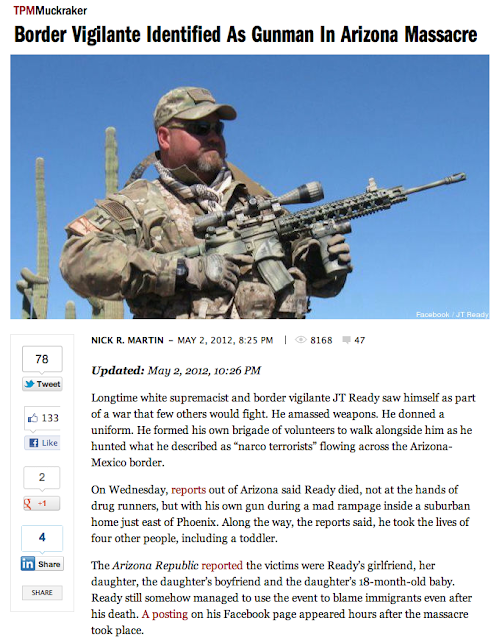 From the textmex obsessed imagination of Memo Nericcio at 7:42 PM No comments: 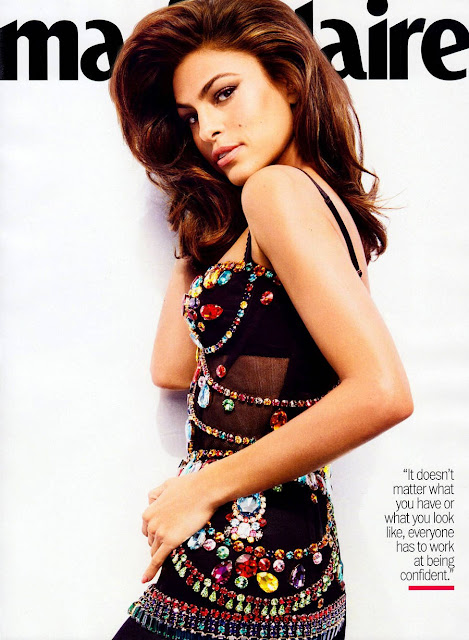 For more on the consequences of cinematic/sinematic transmogrification, see my elegy for Lupe Velez, the Mexican Spitfire in Tex[t]-Mex or in From Bananas to Buttocks: The Latina Body in Popular Film and Culture.
From the textmex obsessed imagination of William A. Nericcio at 4:51 PM No comments: 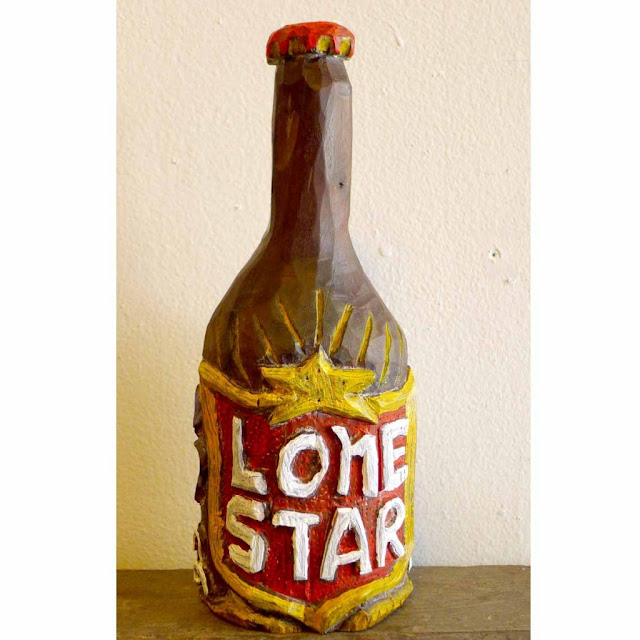 See more of Camp Bosworth's evocative works here.
From the textmex obsessed imagination of William A. Nericcio at 1:45 PM No comments:

here's the print ad {thanks to SDSU Ace Grad Student, Rebecca Hershberger for the tip!} 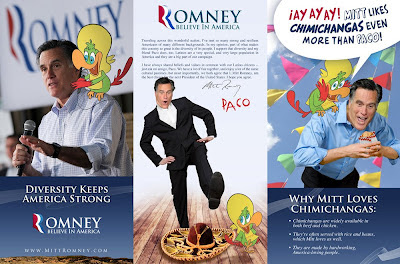 From the textmex obsessed imagination of William A. Nericcio at 2:41 PM No comments:

read it and weep.

From the textmex obsessed imagination of Memo Nericcio at 9:26 AM No comments:

...a great piece by a great writer and cool friend! Felicidades!!!
y mil gracias to Sara Ines Calderón for the link!!!

{as with most stories on the textmex galleryblog, hit the image for the link!}

From the textmex obsessed imagination of William A. Nericcio at 4:08 PM No comments:

Bill Moyers on Pendejo of the Month, Allen West

From the textmex obsessed imagination of Memo Nericcio at 7:56 PM No comments: 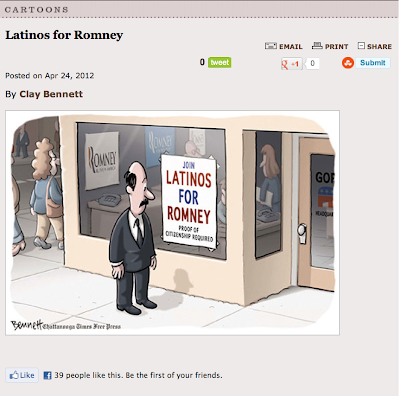 click for source
From the textmex obsessed imagination of Memo Nericcio at 7:53 PM No comments: 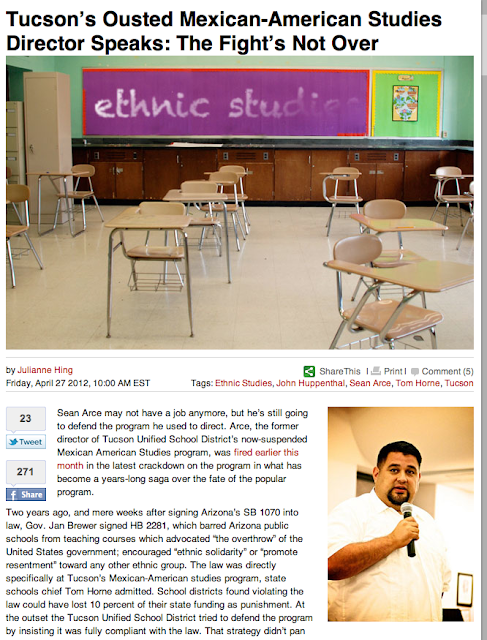 From the textmex obsessed imagination of Memo Nericcio at 5:37 PM No comments: