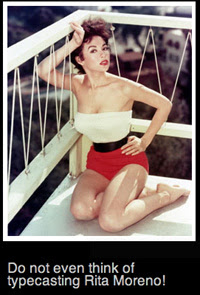 A blast from the past! As I am trapped on this hotbed of peculiar islanders called England, I am far away from the tools that make the Tex[t]-Mex Galleryblog a go-to site for nourishing tidbits of Latino/a-stained culture. As such, you guessed it!, reruns!

Who would have thought that the veritable grandfather of celebrity-blogging, Rex Reed, would have the cultural studies skills to parse the depths of Latina semiotic complexity and notoriety, But I guess if Gene Shalit can be outed as a pre-Derridean seer (viz p.44, Tex[t]-Mex), then why can't Reed (film fetishist and would-be kleptomaniac) join the ranks of Art Aldama, Rosa Linda Fregoso, and Chon Noriega as knowing arbiters of the Latino visual culture?

This link does double service as our Tex[t]-Mex Galleryblog has done a woefully poor job warehousing untoward representations of Puertorriqueños, Dominicanos, and our other and various Latino/a hermanos y hermanas. Reed's take on Moreno begins to redress this pernicious imbalance.
From the textmex obsessed imagination of William A. Nericcio at 2:47 AM No comments:

It had to happen! Spend all that time writing about movies and all of a sudden you wake up one day thinking you're Scorcese! I humbly submit to you, dear reader/viewer, Tex[t]-Mex, The Movie®. The character avatar I selected looks more like a ex-pat Chilean journalist from the 70s (¡holy stereotypes, Batman!), but it was either him or the bear. Go to the site to see what I mean!

You Cannot Make this Shite Up, or, Soylent Green, Mexican-Style 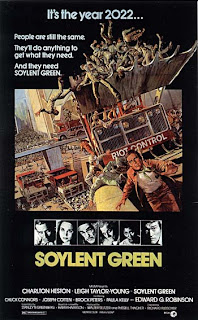 Our ace domestic correspondent for American affairs, Josie Nericcio, checks in with a link on the latest comic antics of fascist-with-good-hair, hate-anchor Glenn Beck. Our thanx to the Xicanosmotic gods for MediaMatters.org!
From the textmex obsessed imagination of William A. Nericcio at 12:51 AM No comments: