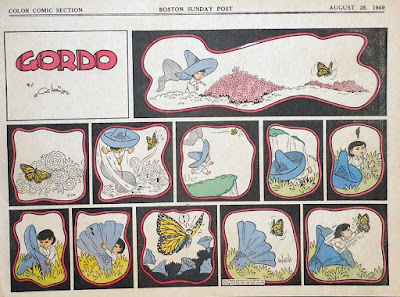 
Long toward the end of a long timeline that begins with the Lascaux cave paintings, there, just after the turn of the last century between Winsor McCay and genius-of-the-present-moment Chris Ware, rests the redoubtable master of sequential art, Gus Arriola. A Mexican-American artist from Arizona who ended up spending the rest of his life in California, Arriola’s comic strip Gordo delighted bemused and confused readers from November 24, 1941 to March 2, 1985. “Confused” because Arriola’s ambition, particularly in his Sunday splash-page cartoons, were the stuff of comic book legend, marrying the semiotic ambition and range of McCay’s earlier work, with a baroque, jazzy color palette (and a sublime disregard for the precision of the square panel—a precision, I might add, that has led to the banal cacophony of boring, shrunk, stiff compositions that fill the daily fishwrap today: yes, Mary Worth and Beetle Bailey, I am talking about you).

Gordo is best remembered for being one of the few daily, mainstream, narrative artifacts that was focused on Mexico, Mexicans, and Mexican culture—also one of the few that was positive and evocative (though, irony of ironies, Gordo begins as a strip focused on a fat, lazy, “Mexican”--scare-quotes necessary, por favor). In an American popular culture sea of stereotypes featuring raping bandit Mexicans (in case you’re wondering where idiot Donald Trump gets his ideas), dirty, pre-civilization Latinas/os, and the rest, Gordo evolves as a brimming visual cauldron of subterranean semiotic insurrection, surreptitiously introducing readers to Mexicans and Spanish-language culture with a light touch, and a rigorous and disruptive compositional eye.  Old school hands in the comics trade like Mort Walker and Charles Schulz envied Arriola’s eye and pen, with Charlie Brown’s father touting Arriola’s strip as the “the most beautifully drawn strip in the history of the business.” Like the aforementioned Chris Ware, Arriola’s genius rested with what used to be called postmodern aesthetics—as much as Arriola loved to tell a story he also (and simultaneously) told a story about stories (meta-narrative from a Chicano meta-mensch).

For me, a little Mexican-American kid growing up in the 60s, Arriola’s warped and warping lines did a number on my imagination—though I was born on and in the U.S./Mexico border in Laredo, Texas, and was, as a result, submerged in Tex-Mex/Mexicano cultura, the English-language/ ‘Merican side of my psyche was utterly bereft of Mexican influences—in this regard both Speedy Gonzales and Gordo are like bizarre twin angel and devil perched upon my shoulder, speaking in English (but with a decidedly “Mexican” accent) and seducing my psyche with parsed and unparsable utterances that moved and delighted me on the surface and had deeper, unknowable impacts elsewhere, marking my career in cultural studies.

The Director’s Cut: Dear Arrob@ reader, do note that this piece of writing has had a long sordid history: a somewhat truncated version of this piece first appeared in Joshua Glenn’s cool online magazine Hi-Lobrow.com. Next, it appeared in The Routledge Companion to Latina/o Popular Culture edited by my good friend and collaborator Frederick Luis Aldama. In its first incarnation, Josh Glenn put his able editorial pruning shears to work and edited it down to a squib (I still love you, Josh!); next, the production team at Palgrave/Routledge got the bright idea to cut out ALL of the images—writing about Gus Arriola without sharing his vivid, artful comic provocations is madness. So here, on Arrob@, you get the director’s cut. I pray the shade of Gus Arriola visits me in the night and gifts me with a shred of his lucid, evocative imagination!
From the textmex obsessed imagination of William A. Nericcio at 2:30 PM No comments: