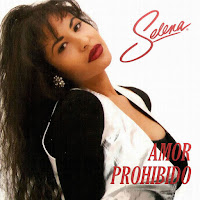 The silvery electronic synthesizers that open Selena's Amor Prohibido (1994) usher listeners into a lush (sweet, but not treacly) aural landscape every bit as unpredictable and split (between English and Spanish) as the South Texas coastal shores that gave birth to this singing goddess of conjunto and, after Cesar Chavez (or, maybe ahead of him) the most famous Mexican American superstar the United States has ever known.

Amor Prohibido (Forbidden Love) segues into No me queda mas (I have nothing left or nothing is left to me), a dreamy/sad meditation on loving and losing. The rest of the album is the stuff of memory, released just a few months before her callous assassination by Yolanda Saldívar, Selena's fan club president and agent for her fashion line in Mexico. 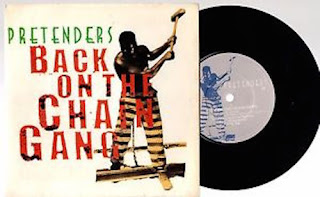 Selena's album's pièce de résistance, for me, however, is her cover / revision / rendition of the Pretenders' Back on the Chain Gang, here subjected to Tex-Mex metamorphosis by Selena and her band as Fotos y Recuerdos--the edge of Chrissy Hynde's cut is softened somewhat by the potentially cheezy synthesizer beat applied by Selena, but what emerges is actually a kind of conversation between the White American Rock and South Texas Tejano music, between the edgy pre-cursor to alternative rock and South Texas Chicano rhythms--you had no choice but to dance to the evocative catchy cadences of this next world beat, this mestizo magic.

Selena's title transformation also foregrounds what the Pretenders's version perhaps kept more obscure, the song a paean to nostalgia and memory (facilitated by a photograph, that most weirdly fetishistic and ubiquitous of objects).

When Selena's version was released I had recently moved to the West Coast from the chilly, barren enigma (to me) of Eastern Connecticut--I remember hearing Selena's Fotos y Recuerdos on the radio, as I bopped between Chula Vista and San Diego, San Ysidro and LA in my old 1980s-era VW Rabbit diesel. Here was a song that embodied what I came to call Xicanosmosis, (Chicana/o + Osmosis) where the jangling guitars and dangerous new wave crooning of Hynde and her band was force-fused with a decidedly "Mexican" consciousness--"Mexican" not Mexican, as it came from WITHIN the United States, from a South Texas borderlands with a mind (and wit, and language) of its own.

Selena's untimely death led to her short-term apotheosis onto the top of the music charts, but it also erased the possibility that her South Texas born/borne sound would dominate the ear-space (and the Zeitgeist) of the United States.

When JLo was chosen to play her in the requisite biopic (as if there was no difference between a Tejana and a New York Boriqua--you can imagine them in central casting "They both have big nalgas and speak Spanish"), something died, or better put, Selena died a second death--the unique charm and spark of a South Texas superstar silenced and elided a second time on the silver screen.

An edited, more pithy version of the piece above appears here, improved by the magic, pruning shears of Joshua Glenn, head agent at Hilobrow.com!
From the textmex obsessed imagination of William A. Nericcio at 6:38 AM 2 comments: