Tonight is opening night!
Calling all Seattle/Tacoma fans of all things Latina/o, Mexican, Mexican-American, Chicana/o, Hispanic (don't panic!),... and, of course, we can't forget our new moniker Latinx!!!
6-9 pm tonight
Nepantla Cultural Arts Center
9414 Delridge Way SW
Seattle WA 98106
818-357-0195
nepantlaculturalarts@gmail.com
Free and Open to the public--all Raza especially invited (their amigas/os y allies as well!). I will be speaking at 7pm or so and shilling all kinds of mexy swag--t-shirts! posters! books! etc!
Mextasy: Seductive Hallucinations of Latina/o Mannequins Prowling the American Unconscious is a traveling pop-up art show collecting the work and sharing the decadent Latina/o art collection of William Anthony Nericcio and Guillermo Nericcio García . The traveling exhibition was originally curated by Leticia Gómez Franco for Casa Familiar, San Ysidro, California , and Rachel Freyman Brown, South Texas College, McAllen, Texas —Mextasy both reflects on and expands upon Nericcio's 2007 American Library Association award-winning book with UT Press, Tex[t]-Mex: Seductive Hallucination of the "Mexican" in America​. In addition to racist artifacts from American mass culture (the bread and butter of Uncle Sam's unconscious and the backstory for the resurgence in anti-Mexican, anti-Latina/o peoples presently), the show also features works that is that is, works by Mexican-American and other Latinx artists where the delicious fusion of the Mexican/US borderlands/frontera is writ large as in the deliriously delicious artistic tracings of Kim Navarro, Chikle, Perry Vasquez, and Izel Vargas.
The Seattle show at Nepantla Cultural Arts Gallery​ (fueled by the arts cool genre in Friends of the Nepantla Cultural Arts Gallery​, is a totally new curated experience dreamed up by Nericcio, Nericcio García, and Nepantla Guru Jake Prendez​. Hot on the heels of the hit #Mextasy show at Iowa State University celebrating the 25th anniversary of the Latina/o Studies Program there, it appears here in Seattle to treat the Pacific Northwest to a singular “circus of desmadres.” 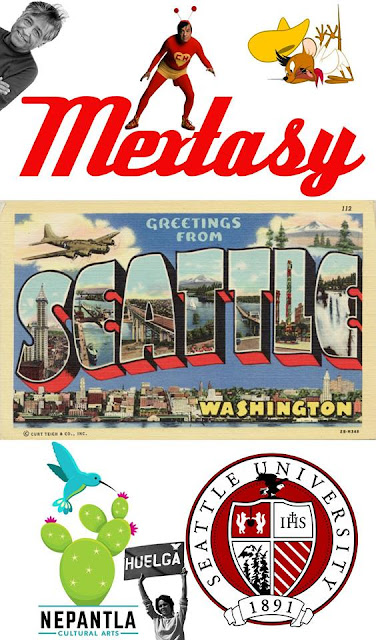 From the textmex obsessed imagination of William A. Nericcio at 10:48 AM No comments: