The History of Weird Tales: The Short Version? They Are Not Weird at All--Merely Compulsively Repeated, Projected Nightmares of Mexicans, Africans, Arabs, Asians, and More Running Off with Gorgeous White Women 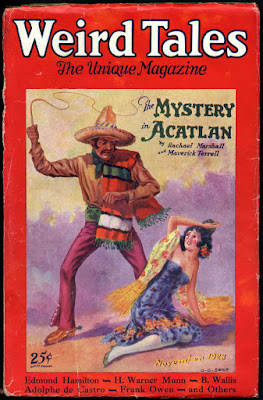 It comes as no surprise when the main plot point becomes obvious in Tex[t]-Mex: Seductive Hallucinations of the "Mexican" in America--that the history of Mexican and Latina/o figuration in the cultural space of the United States is an endless loop of hallucinations, fantasies built around fear of miscegenation, promiscuous female sexual want, etc.  The backstory of xenophobia and nativist pandering from Hitler to Trump is merely a projection of genetic pool anxiety--the caucasian nightmare of swarthy n'ere-do-wells frolicking amidst white women's pudenda!

Weird Tales no doubt fueled these fears--fears that echo loudly with 'birthers' rant about taking back their  country, when anti-miscegenation rage (often fueled just by the sight of a biracial body (thanks Obama) or the sound of a Spanish-language accent) takes center stage. Here's wikipedia (give them some money so they stop acting like PBS around pledge-days) on Weird Tales:

Weird Tales is an American fantasy and horror fiction pulp magazine first published in March 1923. It ceased its original run in September 1954, after 279 issues, but has since been revived. The magazine was set up in Chicago by J. C. Henneberger, an ex-journalist with a taste for the macabre. Edwin Baird was the first editor of the monthly, assisted by Farnsworth Wright.[1] The subgenre pioneered by Weird Tales writers has come to be called "weird fiction". The magazine's office were initially at 450 North Michigan Ave, Chicago, but later moved north to 840 North Michigan Ave.[2] {... more}


Which brings us to a recent posting from the Golden Age Blog--chock full of telling Weird Tales covers; here, the utter fear/desire for S&M-laced sexuality between endangered caucasian lasses and dark-skinned, violent men explodes off the page with pornish regularity. 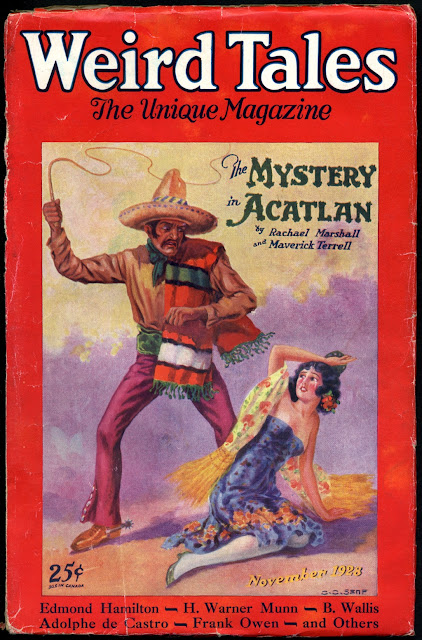 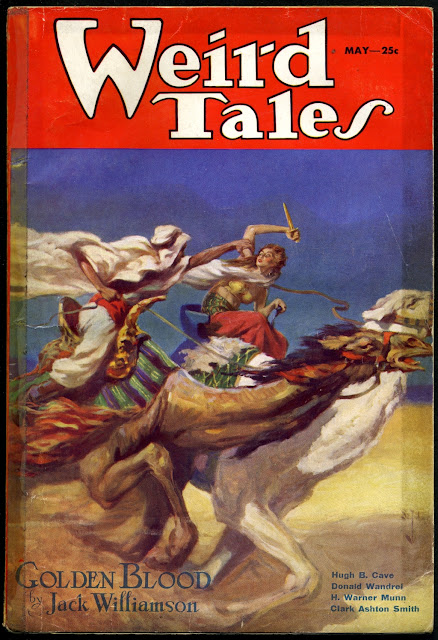 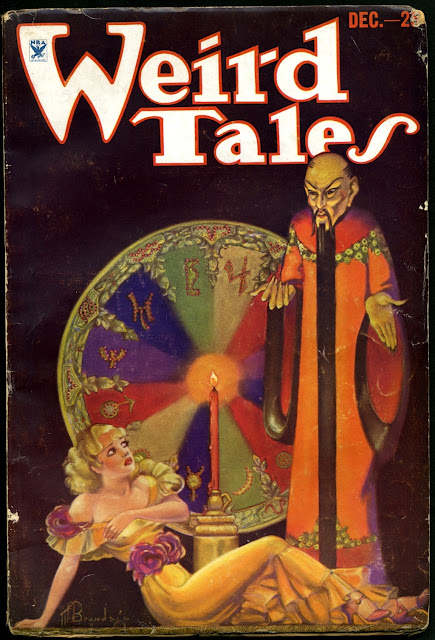 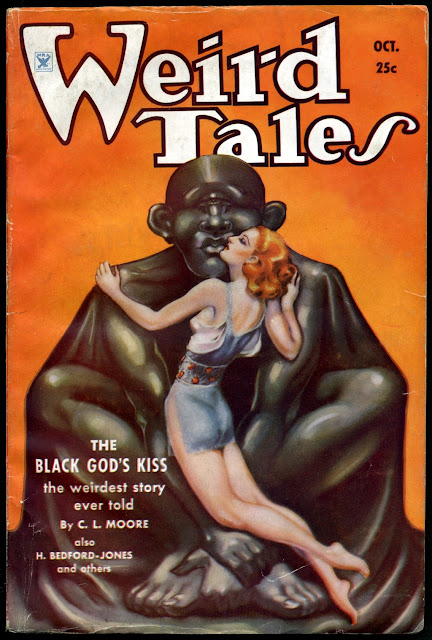 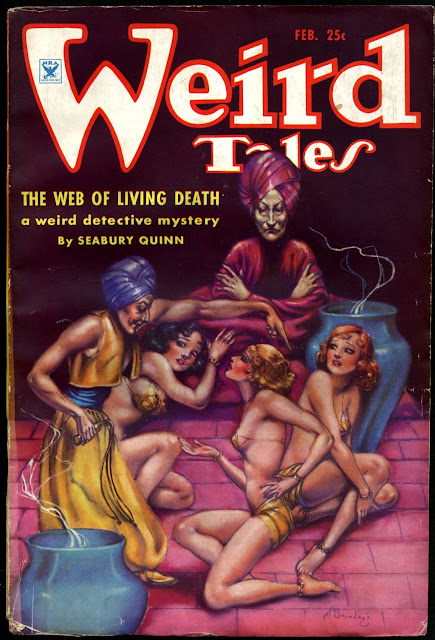 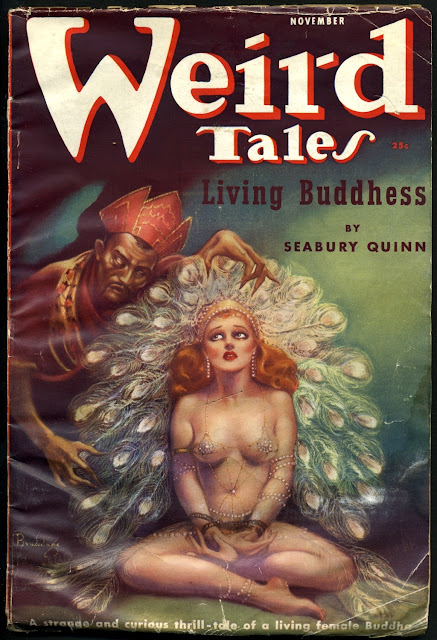 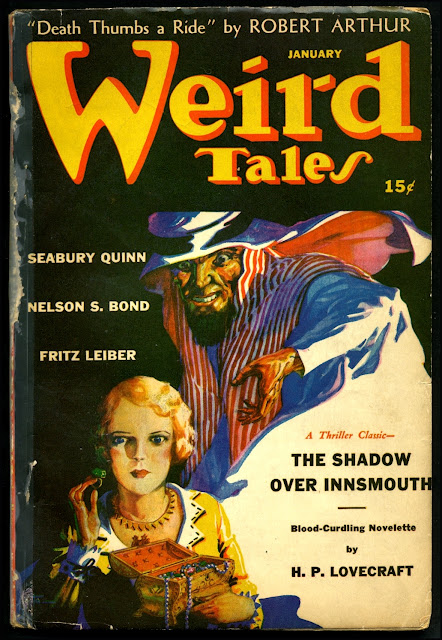 From the textmex obsessed imagination of William A. Nericcio at 8:45 AM No comments:

From the textmex obsessed imagination of William A. Nericcio at 8:30 PM No comments:

Verónica or Veronica? Mexican-Americans in Archie Comics, Dan DeCarlo, and Mextasy-laced Befuddlements of a Teenager's Libido 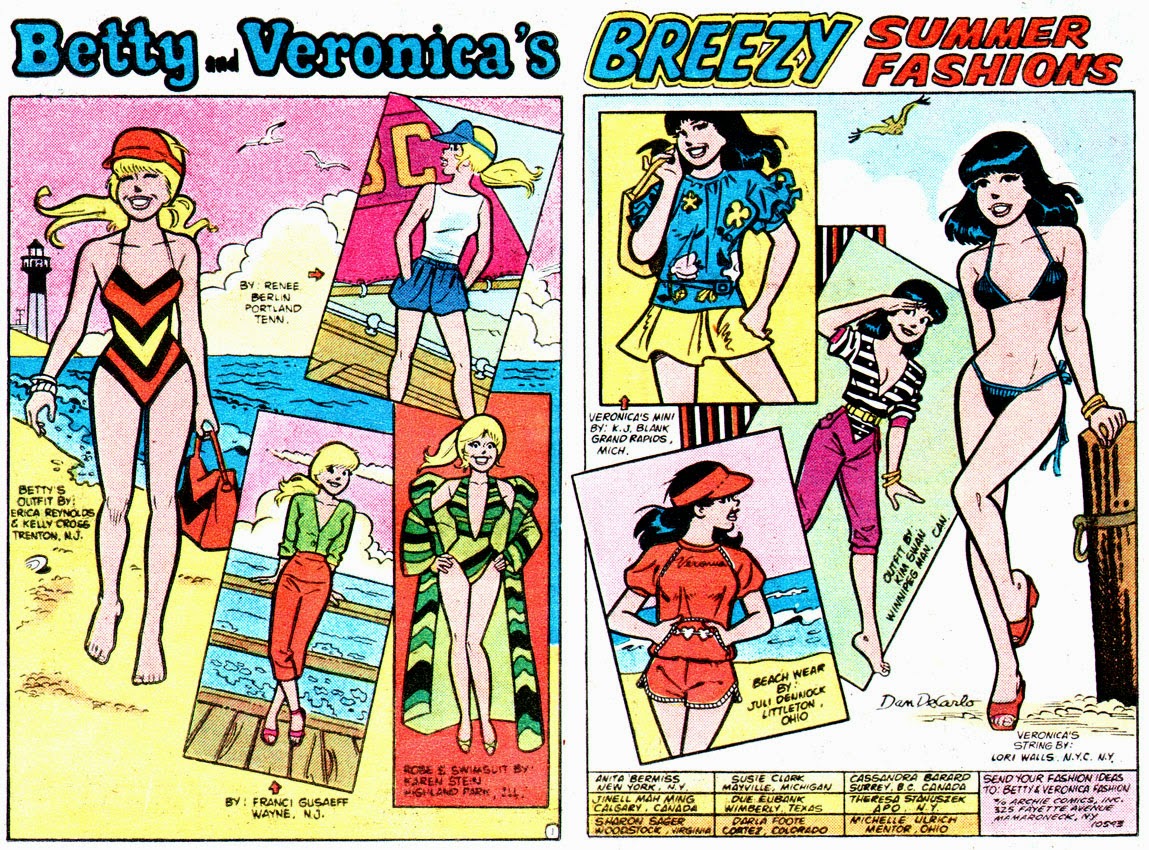 As I have shared before here in these 'pages,' I spent a fair amount of my time growing up in Laredo, Texas, reading comic books--specifically, a lot of Archie Comics.

Many of my obsessions for women were probably inculcated through the india ink wonders that are the magic of Dan DeCarlo--illustrator for Archie, Jughead, Betty & Veronica, and the rest of the Riverdale gang in the Silver Age heydays of the 60s and 70s. Harry Lucey, too, illustrator for my Mextasy homage below, also takes/gets some of the blame!

Back then, though I preferred Betty (she was nicer, and, as a blonde, an exotic for this chubby Mexican-American Laredense), it was Veronica, whose affections I fantasized about. I thought she was Mexican-American, a Latina--at the very least, she sure looked like all the middle and high school girls I was surrounded by at St. Augustine High School in Laredo--those memories still hound my synapses, a Catholic-school altar boy and lecter, surrounded by unthinkably beauty. 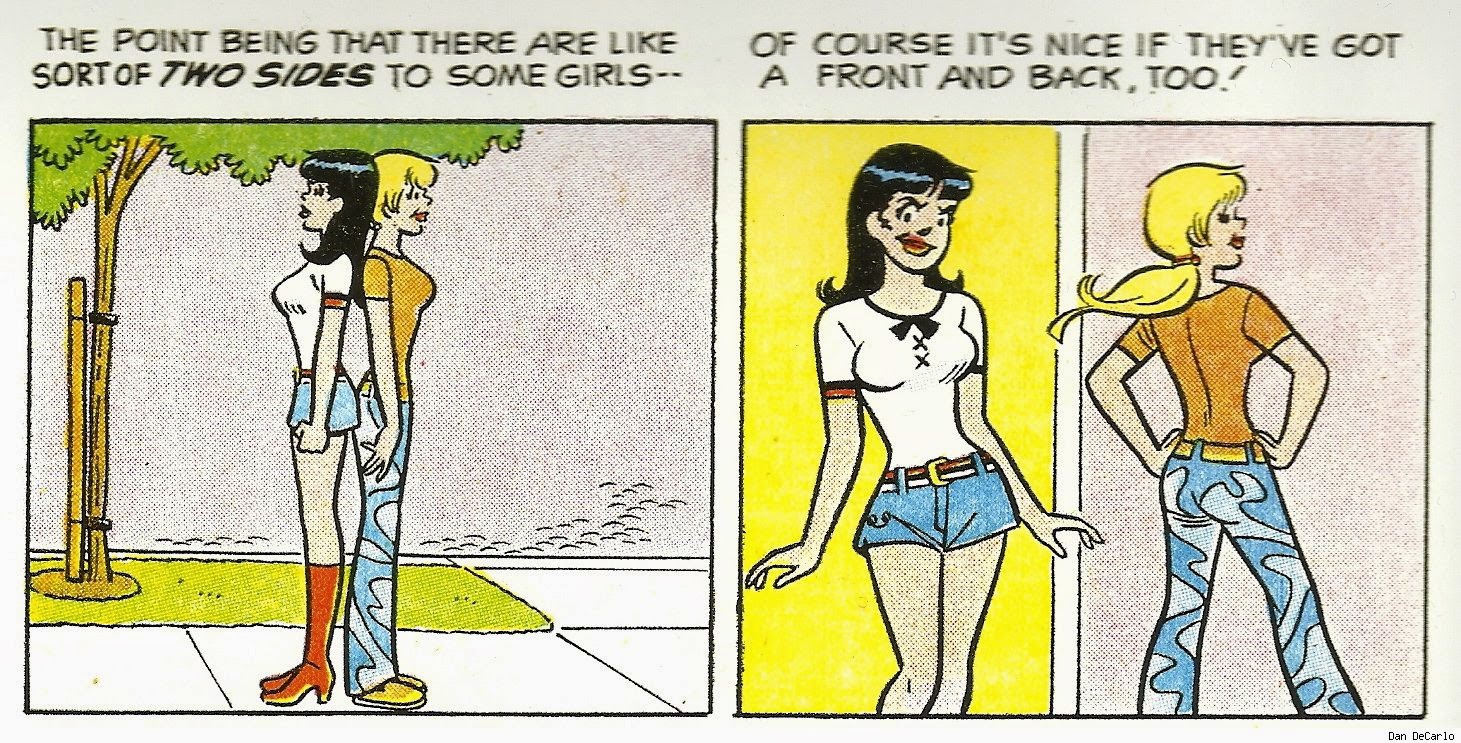 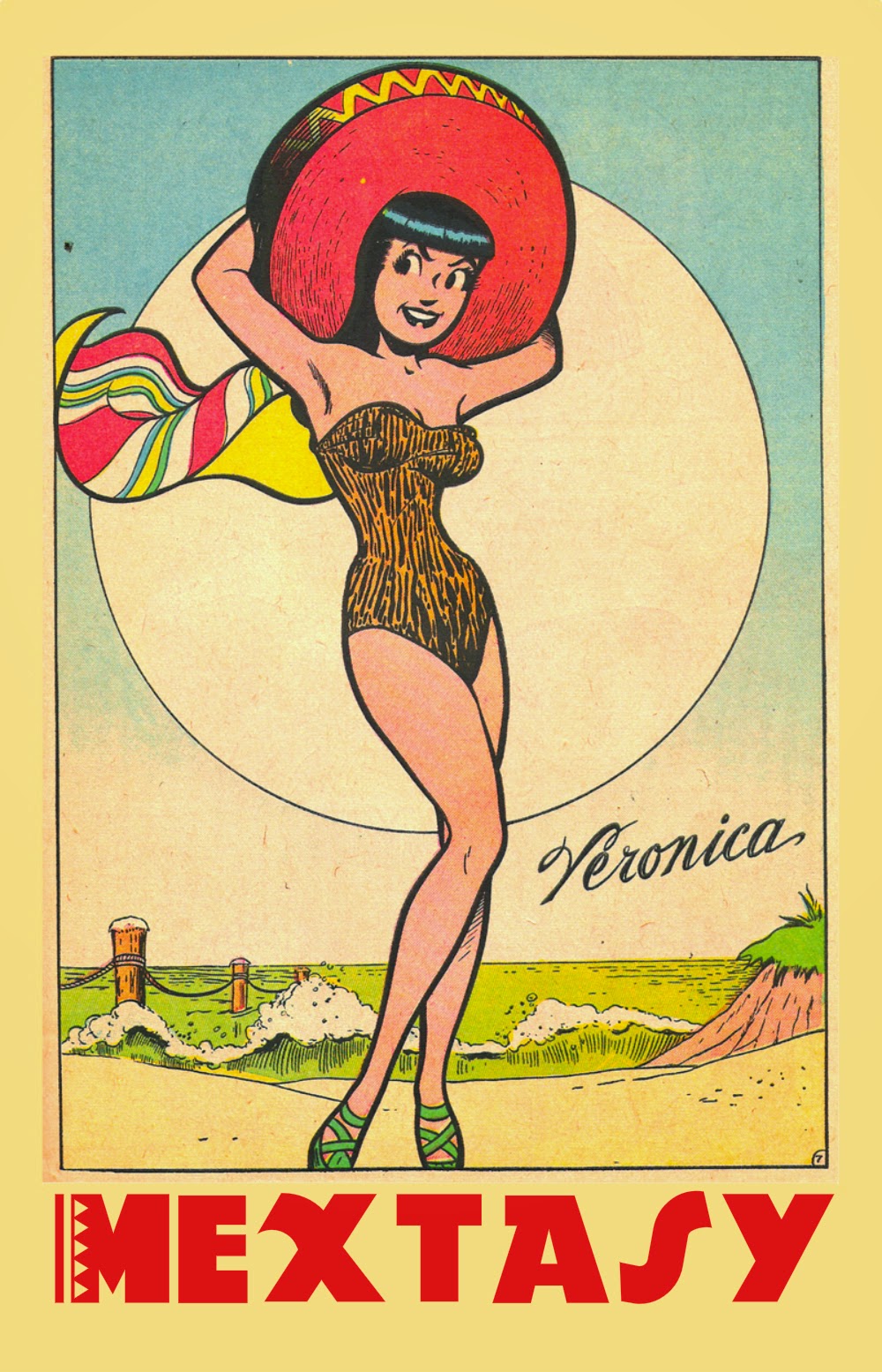 From the textmex obsessed imagination of William A. Nericcio at 11:11 AM 3 comments: