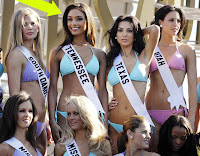 Another take on this heralded event.

Miss USA Rachel Smith had a hard time of it last night in Mexico City as she vied for the crown of Miss Universe. First she fell during the evening gown competition; next, the surly crowd gave her a hard time as she gamely tried to answer an insipid question--hay que raza!

The AP was there with a tasty dispatch; most memorable:

"Smith was booed during her interview and several audience members chanted ''Mexico! Mexico!'' until she spoke in Spanish, saying ''Buenas noches Mexico. Muchas gracias!'' which earned her applause. Mexico has a fierce rivalry with its northern neighbor.... Missing from this year's contest was Miss Sweden, whose country is one of the few to win the crown three times. Isabel Lestapier Winqvist, 20, dropped out because many Swedes say the competition does not represent the modern woman.... Hours before the pageant began, dozens of protesters held a mock ceremony in downtown Mexico City that featured ''Miss Marijuana,'' ''Miss Sexual Health,'' ''Miss Human Rights'' and other candidates with obscenities written across their sashes. The group yelled ''Neither ugly nor beautiful, should a woman be considered an object!''

That the AP is now doubling as a fount of progressive feminist discourse (holy Luce Irigaray, Batman!), is a thing to behold.

Also to behold, alas, Smith falling and being jeered:

From the textmex obsessed imagination of William A. Nericcio at 2:58 AM No comments:

One of our Most Gifted Semiotic Warriors

My Tejana nemesis (watch her spank me in our exchange here) and comadre Maggie Rivas-Rodriguez, a University of Texas journalism professor, is getting her deserved share of love and media attention for kicking the crap out of doofus-director Ken Burns, whose myopic erasure of Mexican-Americans from WWII reminds us of Stalin's penchant for erasing murdered colleagues from old photographs. sas!
From the textmex obsessed imagination of William A. Nericcio at 5:49 AM 2 comments: