John Leguizamo, George Lopez, and a Wave of Latino Celebrities...

Barack Obama's got a lot going for him--even our modest roster of Latina/o celebrities (Holy Jessica Alba, Batman! ¡Caramba, mira el Leguizamo!) are getting in on the act. Click the video below to see what I mean...

From the textmex obsessed imagination of William A. Nericcio at 9:27 PM No comments:

Mexican Calendar Girls Are in the House

Marc García Martínez writes in to share that his ocular synapses were caught by an NPR gift guide touting SFW visions of Mexican pulchritude; click the image for a readable copy of entry or here for the original at NPR. 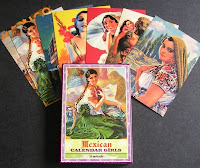 From the textmex obsessed imagination of William A. Nericcio at 10:46 AM 1 comment:

From Touch of Evil to Lone Star: A John Sayles Interview

If Touch of Evil was the best film on the US/Mexico borderlands ever made, as I claim in Tex[t]-Mex, then Lone Star by John Sayles either runs a close second or I made a big mistake that will be have to be rectified in the second edition of the book. For some reason, I left out any substantive reference to Sayles's border opus. So, let me issue a small rectification here, with an interview with Sayles, Roger Ebert's review, and a Charlie Rose piece with part of the film's ensemble (fast forward to the 39:20 point on the counter):

From the textmex obsessed imagination of William A. Nericcio at 9:29 AM 1 comment: