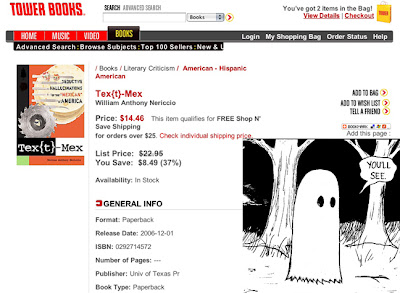 From the textmex obsessed imagination of William A. Nericcio at 3:17 PM No comments:

A respite from stereotypes--just a bit of loving nostalgia:

From the textmex obsessed imagination of William A. Nericcio at 10:11 AM No comments:

Kurosawa's Rashomon and Martin Ritt's The Outrage: Of Samurais, Mexican Bandits, and Paul Newman in Brownface 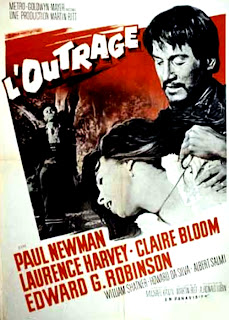 Again, only a brief dispatch here to create a blog-placeholder for a rant on a film by Martin Ritt called The Outrage released in 1966. Ritt takes Kurosawa's classic film Rashoman and remakes it with Newman as a killing, raping, Mexican bandit. The synopsis from Turner Classic is priceless and deserves a place in a Seductive Hallucination Gallery of its own!

Late in the 19th century a disillusioned preacher, a grizzled prospector, and a cynical con man meet by chance at a southwestern railway station. The first two relate events in the recent trial of Juan Carrasco, the territory's most notorious outlaw, who has been sentenced to death for murdering a southern gentleman and raping his wife. The trial was confusing because three witnesses each told conflicting versions of what had occurred: Carrasco claimed that he bound the husband, forced him to watch the rape, and then killed the husband in a duel; the wife claimed that after Carrasco raped her and fled, she killed her husband in a fit of rage when he accused her of having encouraged the bandit; and an old Indian testified that the husband killed himself because of the humiliation he had suffered. After this last account a cry is heard, and the three men discover an abandoned baby. 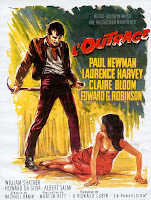 The con man attempts to steal some gold that has been left for the child, and an ensuing argument reveals that the prospector was also involved in the incident: he had witnessed the crime but did not testify because he had stolen the jeweled dagger from the dying man's chest. The prospector claims that the bandit showed remorse after the rape and begged his victim to come away with him, but fancying herself as a prize to be won, she shamed the two unwilling men into a fight over her, and her husband accidentally fell on the dagger. When the prospector offers to raise the child, even though he has five others at home, the preacher's faith in humanity is somewhat restored, and he is able to return to his congregation and the Lord's work.

Tex[t]-Mex's second edition may well have to be bigger than the OED!

Hombre, too, is due for Tex[t]-Mexian roasting as well! Well worth enduring the commercial that precedes the trailer to see Newman as a Native American.
From the textmex obsessed imagination of William A. Nericcio at 9:19 AM No comments:

Comments soon.
From the textmex obsessed imagination of William A. Nericcio at 9:37 AM No comments: