A Cool Review of Tex[t]-Mex from Mexico City 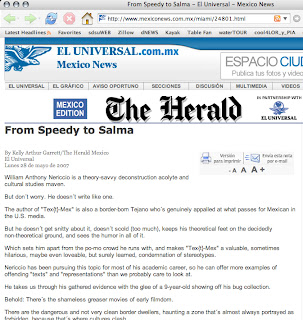 An English-language daily edited out of Miami, Florida and Mexico City, DF published a kindly review of Tex[t]-Mex last week written with zest by Kelly Arthur Garrett. Two days later, it went out of business. No doubt some xicanosmotic curse is in the works here.

Readers of this blog with any heart are asked to put an egg under their bed tonight and light a candle for the University of Texas Press! Might they be next!?
From the textmex obsessed imagination of William A. Nericcio at 1:08 AM No comments:

Italy and Mexico | The Ultimate Convergence or Wrestling and Cultural Fusion

If Hank Quinlan had been a real bordertown detective (and not a character played by Orson Welles in Touch of Evil) and he met me in that dark bar he drinks at in the movie, he might have said something like "Nericcio? Ne-REACH-oh... what kind of name is that? It's not, er, Mesican." It's true. One of my grandfathers was from Partanna, Sicily, Guglielmo Nericcio, to be exact.

A few years back, Italian American literary studs Fred Gardaphe and Anthony Tamburri tried to get this Chicano/Tejano hijo de Laredo, Texas to embrace his inner Italian, tried to get this would-be Latin American literary critic to get down with his inner Siciliano--and they damn well almost succeeded. I even published a short piece in Tamburri's VIA, back in the day, and I find that a fine chianti wets my whistle more of late than a fine tequila of late. They may have succeeded more than I know! 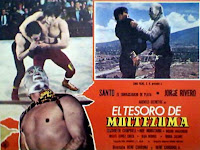 All of this a long preface to the fact that a moment of Chicano/Italiano convergence happened this past weekend in Jersey when Mexican wrestlers invaded a bastion of an East Coast Italian American "barrio" in New Jersey! Read the story here, now, or I'll put you in a pair of cement shoes. I know, I know--enough with the stereotypes!
From the textmex obsessed imagination of William A. Nericcio at 5:00 AM No comments: