Just brilliant.
From the textmex obsessed imagination of William A. Nericcio at 6:11 PM 1 comment:

I am on record as seeing a long-tradition of an almost-erotic affection in California--an affection, not to say fetish, for beating the living daylights out of Mexicans and Mexican Americans. What happened in Los Angeles over the weekend merely underscores the salience of this, what's the word?, hm, ritual. 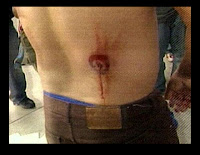 This image appeared this morning from KNBC.
From the textmex obsessed imagination of William A. Nericcio at 5:26 AM No comments:

As perplexed and obsessed by "Mexican" stereotypes as this Galleryblog purports to be, it must also confess to its growing numbers of readers that it is as consumed by "white" figuration as it is by "brown"--the semiotic and lyric evocativeness of the Caucasian then, seduces ours eyes as well as the epidermal intrigues of a swarthier sort. Case in point, the marvelously hyperreal young lad to be seen in the Louisiana sweet porto (sic) rican potatoes yam crate cover that here follows: 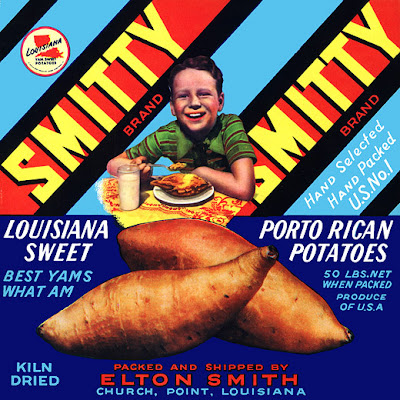 Originally archived at the amazing boxofapples.com, said human facsimile, produced with Warholesque, pre-photoshop™, gaudy contrasts, presents to the unaware, unassuming consumer a boggling face that delights even as it haunts.
From the textmex obsessed imagination of William A. Nericcio at 2:08 AM No comments: 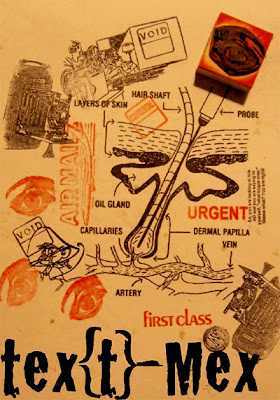 The book designer at The University of Texas Press responsible for the unique look and feel of Tex[t]-Mex: Seductive Hallucination of the "Mexican" in America is a genius named Lisa Tremaine. Like some graphic fusion of Man Ray, David Siqueiros, and Meret Oppenheim, this gifted semiotic diva took up the challenge of my "mess" of a manuscript and came up with a book that deserves to win design awards--of course, some might say I am biased in this regard, to which I respond hush!

In graduate school Avital Ronell's Telephone Book set the standard for progressive, visionary bookmaking from the academy. With Tremaine's work on Tex[t]-Mex, perhaps said volume has earned the right to sit alongside that amazing project.

UTPress recently put up a gallery that hightlights the 16-page color signature inside the hardback and paperback editions of Tex[t]-Mex. A sample, by artist Guillermo Nericcio García appears above.
From the textmex obsessed imagination of William A. Nericcio at 5:09 AM 1 comment: 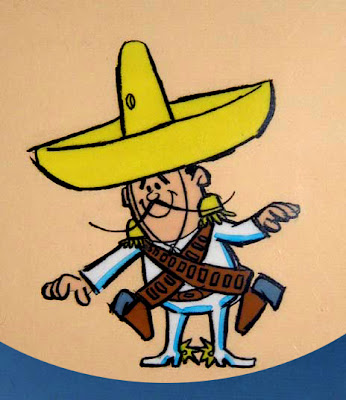 He's even a dim memory for us forty-somethings valiantly staving off assaults of incipient Alzheimer's, but back in the day, Frito-Lay corporation's Frito Bandito was the cock of the walk when it came to corporate animated spokespeople--the Trix rabbit, Lucky Charms leprechaun and Uniroyal Tiger (nightmarish rogue), have nothing on this avatar of "Mexicanicity." For an oldie but a goodie, look up Chon Noriega's piece on the Frito Bandito for the San Diego Latino Film Festival back in 1987. A fan site on Mr. Bandito is here.

A brief reading of the Frito Bandito appears in Seductive Hallucination Gallery Two in my UTPress Tex[t]-Mex volume on Mexican stereotypes in American mass culture.
From the textmex obsessed imagination of William A. Nericcio at 1:38 PM 3 comments: 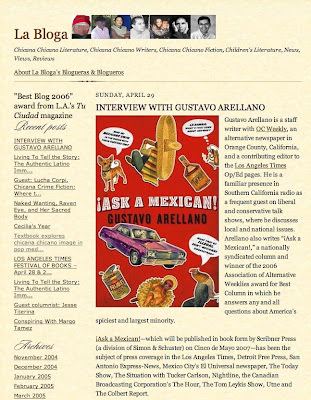 SoCal's own loco mouthpiece, Gustavo Arellano, holds forth in an interview with daring and dashing Chicano scribe Daniel Olivas at labloga.blogspot.com

Put that mouse to work here for the link!
From the textmex obsessed imagination of William A. Nericcio at 11:50 AM 1 comment: