One More Goodbye to Will Elder! 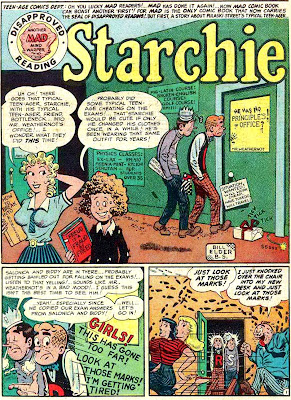 From the textmex obsessed imagination of William A. Nericcio at 11:11 PM No comments:

Gracias.
From the textmex obsessed imagination of William A. Nericcio at 8:55 PM No comments:

From the textmex obsessed imagination of William A. Nericcio at 3:40 PM No comments: 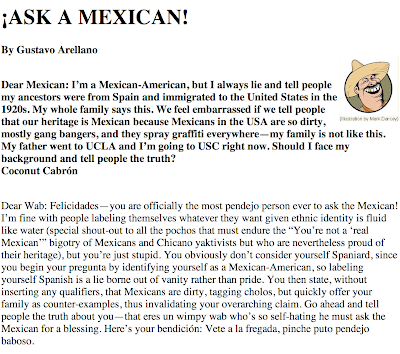 Yowza!
From the textmex obsessed imagination of William A. Nericcio at 3:18 PM No comments:


OK, so as far as I know Weezer is neither Mexican, nor Chicano--I just love their new song! I am, however, also part Sicilian, so let us say I am exercising my affection for Rivers Cuomo, Weezer lead guru and fellow paisano Italiano.

From the textmex obsessed imagination of William A. Nericcio at 9:07 AM 2 comments: 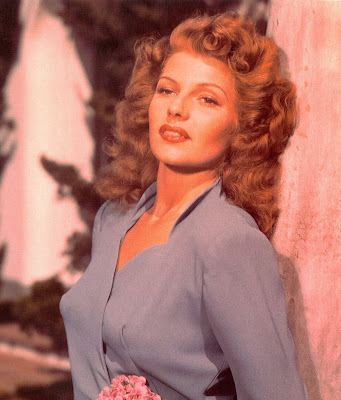 Just time today to upload this shot from Caren Roberts-Frenzel's book with Abrams, Rita Hayworth: A Photographic Retrospective.
From the textmex obsessed imagination of William A. Nericcio at 10:26 AM No comments: 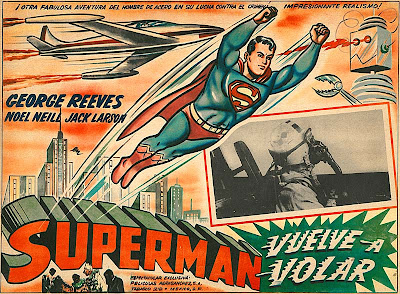 From the textmex obsessed imagination of William A. Nericcio at 5:15 PM No comments: 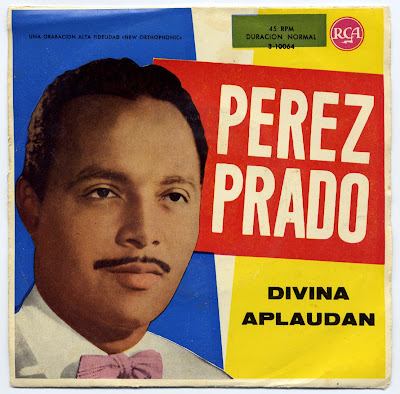 From the textmex obsessed imagination of William A. Nericcio at 3:01 PM No comments:

and, for my UCR students, a timely ZOOT SUIT inspired cartoon! 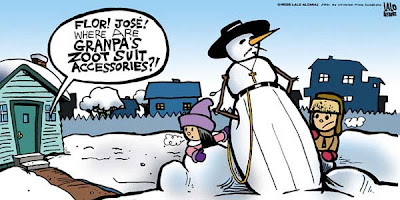 From the textmex obsessed imagination of William A. Nericcio at 2:57 PM 1 comment:

Transpsychic Displacement or Becoming/Inhabiting the Other: Anna Deavere Smith at TED

From the textmex obsessed imagination of William A. Nericcio at 1:30 PM No comments:

Wizard Magazine "Alien" Jokes and Other Matters Stereotypical and Offensive

Regular Tex[t]-Mex Galleryblog malcontent Profe Marc García-Martínez writes in with a recent finding he stumbled across and had to tag with his incisive critical microscope:

Some more intriguing evidence to stumble upon in your inexhaustible investigation of the ubiquitous hallucinations of Mexicans in our popular media.

This one comes across as noteworthy for its allusive, rhetorical edge, among others.

Point your expert eye to the bottom left of this page from May 2008 Wizard Magazine. 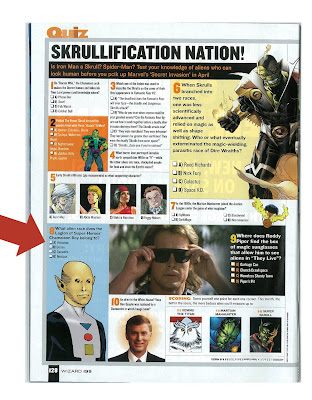 There you will find a quiz-question (#8) on the heritage of the alien Reep Daggle of Durla—a.k.a “Chameleon Boy” from DC Comics’ Legion of Superheroes.

I’m thinking a probing letter to Wizard Magazine in straightforward response to this, uh…well—attempt at humor and cleverness—is in order. Perhaps you will want to help inscribe it?

All of these facts about Chameleon Boy’s history in the DC Comics Universe are genuine, so I’m sure you will wonder along with me as to just how accidental the “Mexican” inclusion was. Perhaps the fine folks at Wizard Magazine knew what they were doing. Maybe not.

Either way, this is some curious caca here, Inspector. What’s your take?

Nericcio here with his take--Mexican Aliens are an easy go-to line for the gringo jokester set; the joke writes itself. My deconstructive move would be to say that yes, Chameleon Boy, is obviously Mexican and Alien, and that, naturally, it was from these marginal subject positions that he derives his strengths... like the chrysalis humans in Cuban theorist Severo Sarduy's writings, Mexican shapeshift like trannies on holiday. If there is a reason Mexicans will be present for the next-wave future of the southwest, it is this penchant for transformation, metamorphosos, and evolution that marks their development and our futures.
From the textmex obsessed imagination of William A. Nericcio at 8:37 AM 1 comment: 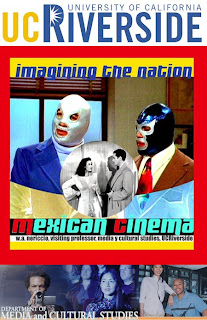 For those of you dropping in today for your daily dose of dissected Mexican and Latina/o stereotypes, you are in for a shock as I am allowing my Media and Cultural Studies class at UCRiverside kidnap today's blog to update their syllabus.

Here's the revised line-up for the rest of the term:

Read Andrew Higson's "The Concept of National Cinema" and Randall Johnson's "In the Belly of the Ogre." In class, we will discuss Higson and Johnson as a set-up for our screening of Luis Valdez's I am Joaquin (full-text .pdf) and Culture Clash's OTC (Other than Chicano).

Discussion of Zoot Suit; please read Rosa Linda Fregoso's "The 'Return to the Beginning'" essay in MEDIATING TWO WORLDS carefully in preparation for the discussion. Also and KEY--bring your writing from your CINEreactionRANT 2 to class, carefully edited and ready to turn in.

CHANGE--Garcia Canclini reading, Consumers and Citizens, now OPTIONAL; required reading? Josie Saldaña's: "In the Shadow of NAFTA: Y tu mama tambien Revisits the National Allegory of Mexican Sovereignty" from American Quarterly - Volume 57, Number 3, September 2005, pp. 751-777. This article has been emailed to you AND is available here.

Your reading of Hester Baer and Ryan Long's "Transnational Cinema and the Mexican State in Alfonso Cuarón's Y tu mama también" is optional; we will concentrate in class on a discussion/debate of your screening of Cuarón's film--

while there is NO cineREACTIONrant due this week, it would not hurt to come to class with three typed discussion questions that derive from the film and this class; you may turn these in for "extra-credit" if you wish. Make sure your name is printed on the questions you submit.

Exam 2: your one-hour, in-class exam will comprehensively cover all the materials we have encountered since I took over the class for Professor Freya Shiwy.

cineREACTIONrant, due, THURSDAY, June 5, 2008, in class, typed, up to two-pages, double-spaced, proofread, and with a clever title: "Presume that BABEL provides viewers with a snapshot of director González Iñárritu's psyche, his Freudian unconscious. In your rant/critique, tell your reader all about this hidden psyche using direct and specific reference to key images/scenes from BABEL.

final class discussion on BABEL; receive take-home FINAL, aka your cineIMAGINATIONchallengeFINALE; this take-home final is due, via email, as an attached .doc or pdf file on June 10, 2008 at 10am. If you want ALL of your marked work returned to you, please bring a good-sized envelope with enough postage (3 or so stamps) so that I can mail it all back to you after June 10, 2008!

From the textmex obsessed imagination of William A. Nericcio at 5:56 AM No comments:

I have run across an article that largely supports my suspicions published in Tex[t]-Mex regarding those "bloodstains" of nations in conflict: stereotypes. I can't exactly call it pleasant Sunday morning reading, but it is bracing and telling in our age of the Mexican pogrom in America. Here's a taste (read the whole thing by clicking the "sigh" below): 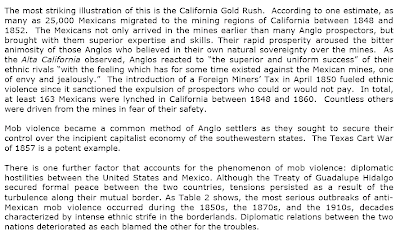 Here's the official citation abstract for the piece by William Carrigan and Clive Webb: 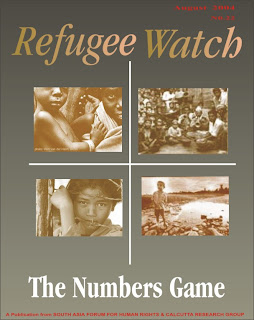 The lynching of persons of Mexican origin or descent has been largely overlooked by historians of American mob violence. This essay offers the first attempt to construct a systematic set of data on the subject. The authors contend that between 1848 and 1928, mobs lynched at least 597 Mexicans. Traditional interpretations of western violence cannot account for this phenomenon. The actual causes of mob violence against Mexicans were several-fold: race and the legacy of Anglo American expansion, economic competition, and diplomatic tensions between Mexico and the United States. Throughout this era, Mexicans formulated numerous means of resistance against Anglo mobs. These included armed self-defense, public protest, the establishment of mutual defense organizations, and appeals for aid to the Mexican government. The central aim of this essay is to broaden the scholarly discourse on lynching by moving beyond the traditional limitations of the black/white paradigm. Placing the experience of Mexicans into the history of lynching expands our understanding of the causes of mob violence and the ways in which individuals and groups sought to resist lynching and vigilantism.

The essay is based on numerous archival sources in both Spanish and English. These include diaries, letters, memoirs, folk culture, newspapers, government documents, and diplomatic correspondence.

More statistics opposite and here.

Sigh--I came across this article in Refugee Watch #22, online, available by clicking the journal cover image above.

From the textmex obsessed imagination of William A. Nericcio at 7:39 AM No comments:

Email ThisBlogThis!Share to TwitterShare to FacebookShare to Pinterest
Labels: lynchings, Mexicans in America, violence against Mexicans

Our Season of Mexican Pogroms Begins in Earnest 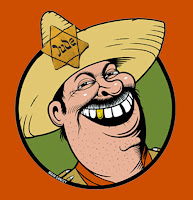 You know the shit is starting to hit the fan when they start rounding up the Jews and the Mexicans at the same time--this news story out of the Midwest seems to ultimately suggest a ripe moment for some sort of Mexica/Semitic solidarity! Oy Gevalt, ¡Dios Mio! An Israeli press riff is here. Maybe Lalo Alcaraz can invent some t-shirt with the sleeping Mexican and the wandering Jew joining arms. The possibilities make me dizzy. For one thing, me and my good friend Leon Lanzbom, ace lit-meister and poet extraordinaire in the SDSU MFA Program, will have to wash down our shrimp tacos at Ponce's with Manischewitz to protest!

From the textmex obsessed imagination of William A. Nericcio at 6:10 AM No comments: