Toward the end of the Lupe Vélez chapter in Tex[t]-Mex, an interlude unfolds wherein I suggest--with all the cynicism anticipated of a literature professor and practicing Nietzschean/Marxist/Derridean/Cantínflasian--that things have not changed much when it comes to the Latina bombshell trope since the first part of the 20th century. But things do change (or, at the very least repeat themselves: even Rita Hayworth, born Margarita Carmen Dolores Cansino, rose to own The Beckworth Corporation, a subsidiary of Columbia Pictures.

So it is we note today the coming of age of Mexican juggernaut Salma Hayek, who has penned a sweet deal with the namesake company that brought us Singing in the Rain, The Wizard of Oz and, even, Soylent Green--MGM Studios. Click the Variety.com image below for the details; the original story appeared here; another take on the tale is here. 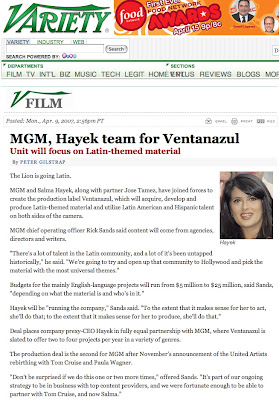 From the textmex obsessed imagination of William A. Nericcio at 9:16 AM No comments:

Gracias to the Beautiful People at La Bloga! 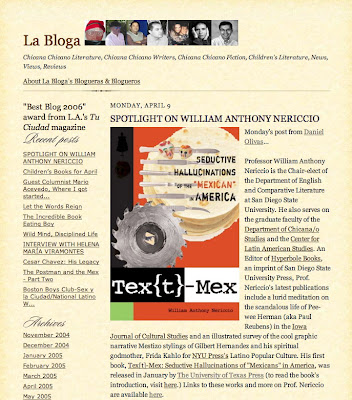 Here's a warm cyber abrazo to the writers, editors, contributors, and raza at La Bloga for their kindly Monday morning posting!
From the textmex obsessed imagination of William A. Nericcio at 10:24 AM No comments:


Tex[t]-Mex has decided to go Hollywood and allow the lurid and intoxicating delights of its wares to infect your synapses, then you've got to do it right! Put your own self in lights here--you know you want to!
From the textmex obsessed imagination of William A. Nericcio at 11:33 AM No comments:

Just a quick headsup with a quick link to my course-focused, student-driven blog, The Obscene Machine, where one of my hungry graduate students ran across a peculiar and familiar "Mexican" friend in La Jolla, California.
From the textmex obsessed imagination of William A. Nericcio at 9:22 AM No comments: