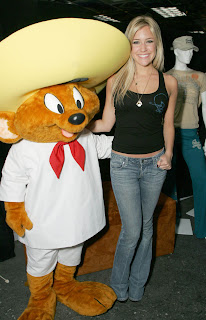 You know a "Mexican" stereotype hall of fame star is ready for his closeup again when he starts making appearances in celebrity blogs more famous for upskirt shots of Britney Spears, Mischa Barton, Lindsay Lohan, and Paris Hilton. And so it is that the star of chapter three of Tex[t]-Mex now finds himself on the front page of the unfortunately-named, if not utterly repugnant, Hollywood Tuna posing with Kristin Cavallari.
From the textmex obsessed imagination of William A. Nericcio at 11:14 AM No comments: 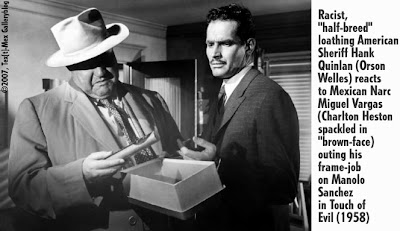 The mention of Charlton Heston, aka Touch of Evil's Miguel "Mike" Vargas, and his NRA-affiliation got me to thinking and reading yesterday, and it caused me to fall across a Salon.com hosted pdf. Now you would have to be "loco en la cabeza" to underestimate the impact that gang violence is having on major and minor urban spaces from Los Angeles to Detroit, from Nuevo Laredo, Mexico to Sao Paulo; however, the particular and sophisticated graphic representation of the same from those gun-loving folks at the National Rifle Association are a tad, shall we say, extreme? In particular, for the purposes of this galleryblog and its lifelong pursuit of "Mexican" and Mexican-American representation is U.S. mass culture, the depiction of Chicano street thugs (latter day banditos)... 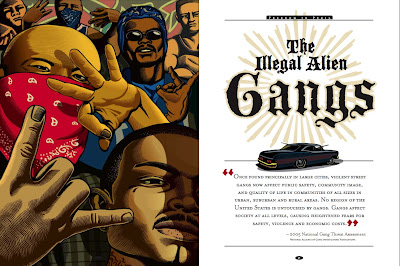 and a soon-to-be-deluged white family--this somewhat selective juxtaposition is telling. 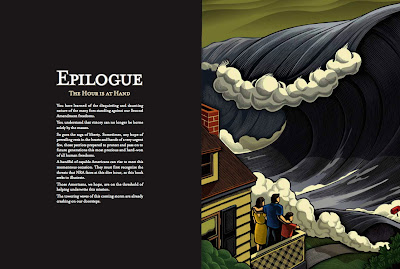 From the textmex obsessed imagination of William A. Nericcio at 2:24 AM 2 comments: 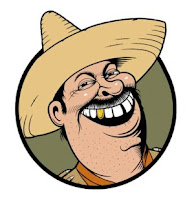 Someone whose probing eye riffs with the rasquache vibe (think Jacques Derrida in Cantínflas-drag) of the Tex[t]-Mex project, is Gustavo Arellano, a Swift-like Chicano satirist whose work appears in the OC Weekly and whose new book ASK A MEXICAN is just out and selling like hot tortillas on a cold Mexico City morning. Or maybe, to be totally honest, it is Tex[t]-Mex that aspires to match the funny and dead-on indictments, disclosures, jokes, political jabs and nasty revelations that make his Ask-a-Mexican column the hit it is! Nestled in the heart of Gringolandia, dodging the jibes and punches of Southern California anti-Mexican voodoo (as close as you can get to a national pastime in SoCal), Arellano's virulent semantics are enough to make a Califas skinhead pee his pants. Arellano's bon mots have come to key parts of my crusade against seductive hallucinations of "Mexicans" in America.

For my indulgent readers who have been clamoring for video on this site, I forthwith produce here via the magic of internet streaming (uncanny voodoo in its own right) illustrative samplings of the late Jacques Derrida and Cantinflas--savvy cultural innovators whose ironic melodies provide the score for much of what it is I do as a semiotically obsessed cultural worker.

Second, we turn to Cantinflas, born Mario Moreno Reyes (1911-93), and not just by the way, had a father who worked in the post office; so did I. Food for thought for Pynchon-styled conspiracy theorists!

From the textmex obsessed imagination of William A. Nericcio at 11:39 AM No comments:

Migrant Workers | Gamers | On the "Literature" of Hate English 725 Seminar Agent Natalie Susi writes in to the Text[t]-Mex Galleryblog with a tip to a gaming blog story on racist, anti-immigrant entertainment; the link is here. A newstory on this tex[t]-mexual travesty is here.

Need a purge--introduce yourself to the work of Louis Hock whose work is on display at the SDSU Art Gallery. 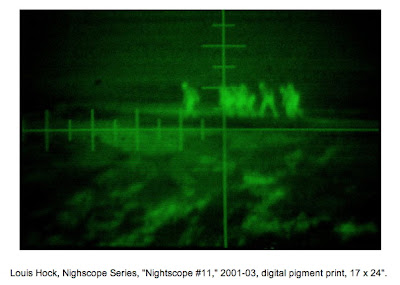 From the textmex obsessed imagination of William A. Nericcio at 1:15 PM 1 comment: 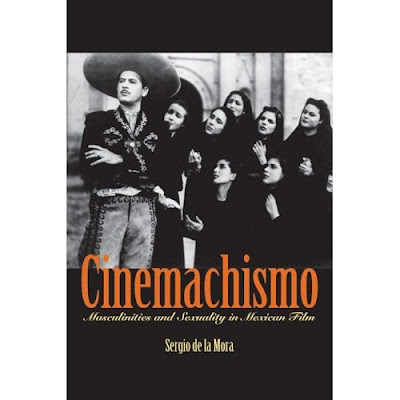 This entry is just a quick pointer to the cool work of a mate of mine in the University of Texas Press stable--Cinemachismo: Masculinities and Sexuality in Mexican Film by UC Davis Prof Sergio de la Mora. A selection from the intro is available by clicking the image opposite or directly from UT Press here. As opposed to Tex[t]-Mex with its focus on estadounidense filmed artifacts, Cinemachismo concentrates on rethinking "Mexicans" in Mexico, with keen chapters on Pedro Infante, Jotismo, Pancho Villa, prostitution and, in a timely epilogue given the recent Renaissance of Mexicans in Hollywood, Gael García Bernal. 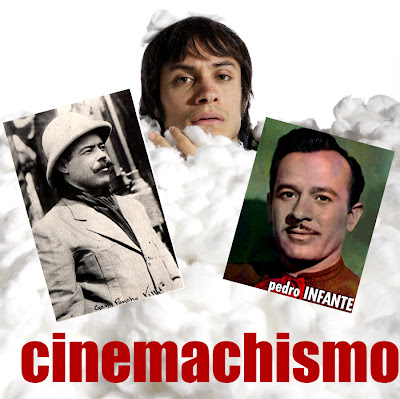 From the textmex obsessed imagination of William A. Nericcio at 7:15 AM No comments: