The first iteration of this post appeared on March 31, 2007 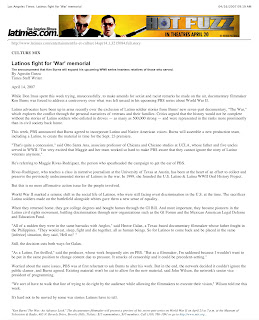 Victory! If the LA TIMES server bars entry, there's a permalink image of the story floating there above these lines. 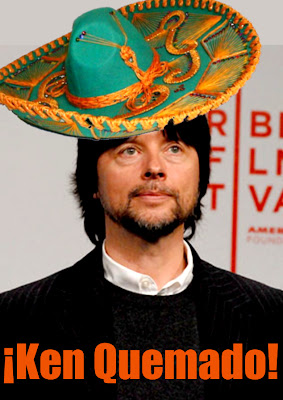 THIRD UPDATE
Alternet chips in its two-cents worth on the story.

The San Diego Union Tribune has weighed in with a story that focuses on the work being done by my retired colleague and veteran, Gus Chavez, on behalf of all erased Mexican American soldiers.

The shit is just starting to hit the fan over PBS-Fellini Ken Burn's documentary on World War II and his slight, tiny, little, unimportant (irony!) error in not including ANY narratives regarding the service and the casualties of Mexican Americans in the "Big One." My father, Mexican American guapo, William Severino Nericcio was in on the second wave at Omaha Beach in Normandy during the D-Day invasion of the continent. He was a mortarman serving as part of the "Blue and Gray," the 29th Division; in the days and weeks that followed he was wounded twice and received two purple hearts (in one of these attacks in France a couple of days after the invasion, he was chased by a Panzer tank hiding in a field and took serious shrapnel wounds to his shoulder and thighs). I include his photo here of my father, circa 1941, in tribute to his bravery and as a tiny semiotic rejoinder to the Chicano-less myopia of Cyclops Ken Burns. 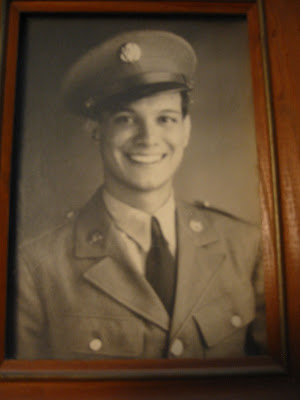 Other good posts on this PBSelision of Chicanos appear here and here. 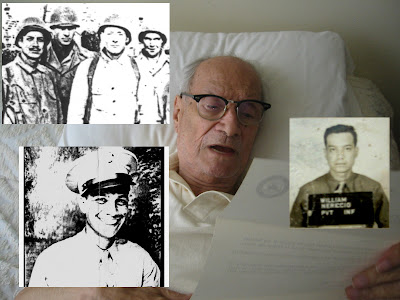 
Two very beautiful things happened to me in the last few months—I published my first book and I was elected the Chair of the English Department at San Diego State University. One of them my father knew about as best he could, the other I did not get the chance to tell him.

A World War II hero and survivor, he was locked in war he could not win, struggling as he did against that monster disease Alzheimer’s, which, in its own way is as formidable a monster as Cancer, or even more a monster, owing to its insidious logic—…

Alzheimer’s takes your loved ones away from you but leaves them behind in body to haunt you with the memory of what they once were—it’s Daddy, but it’s not Daddy; it’s my father, but it’s also, oddly not my father, nothing like my father, the imposter of my father.

For Alzheimer’s attacks memory and if there is anything my father could do, it was remember—he remembered every address in the city of Laredo as a postal clerk; he remembered every moment of his work and suffering in France and Germany and then decided to wall that memory of World War II inside him forever, lest the cancer of the memory of that violence infect his family in Laredo and now, his children’s families in San Diego, California; Los Angeles, California; Austin, Texas; and Laredo, Texas.

So Alzheimer’s attacked this formidable memory, this superpower that he had, and in doing so, erased the memories of fetid war, erased some memories he had of Laredo, of 1609 Hendricks, even, at times, of his children and wife, but even this formidable monster was NEVER able to erase his memory of his beloved mother Anna, his beloved grandfather, Papa Pancho, Francisco Juarez, nor of his Grandmother, the Matriarch, Mama Carlota who lived on forever in his imagination as the beloved benefactor of himself and his brother Frank, and of Anna, his mother, my grandmother, to whom I owe the debt of reading.

So he knew about my book and I will not have had the chance to tell him about being elected English Chair.

None of this happens without Daddy’s work, his wit, his vision, his love for education, for knowledge, for comedy, for everything. His was a voracious but unselfish drive for knowledge—because he lived content to travel the world through the achievements of his children.

In a few minutes we will bury our father, our cousin, our grandfather, our co-worker, our beloved, our friend, but we can honor this amazing man, my father, and defy Death, that rogue fiend, by never allowing the soil to erase, never allowing the days and weeks that follow to eliminate the living memory of this beautiful man, this loving, emotional father, my Daddy, to whom I owe my life and for whom I speak today, Tuesday, April 24, 2007.
From the textmex obsessed imagination of William A. Nericcio at 9:48 AM