I was lecturing last week in genius drama-head profe DJ Hopkins' class (thanks again for a great session!!!) at SDSU that stereotypes function (actually, 'thrive' is the better term) at the level of the unconscious--in the same way that NO ONE trains us to look down in an elevator, and yet, like magic, we do it, it is very likely that we use stereotypes; or, to look it another way, they USE us. Much as a virus needs its host to spread, stereotypes need thoughtless humans to propagate. The biology trope here operates at a level that includes metaphors, but also goes beyond it.

In any event, regular OC contributor John Paul (not the Pope) Gutierrez, editor at Sage Publications, writes in to point our eyes to an uncanny film by Marc Isaacs called Lift--yes, it's about life in elevators, but it's about much much more. Check it out.


One last video post for the morning; this one comes from Modest Mouse--I love the way that old fashioned syringe starts the movement into art/writing/memory/trauma in the music video--I am thinking of using it in my Drugs, Sex, Rock n'Roll class in the Spring.

The visuals follow an artist who enters his personal sanctuary where he is presented with a hand-crafted drawing tool that assists him in materializing his mental impressions. Through drawing circular patterns, the machine discharges an endless web of yarn that guides him through his visual representations of his memories. The story progresses to reveal that he is divided between two worlds, one of dull reality and the second of warped memories. In the process of finding a way out of his consciousness, he is trapped between the two competing spaces, which eventually inflict lethal damage, acting as metaphors to self-destruction.

This lyrical and moving piece was conceived by Nando Costa working closely with lead singer/guitarist Isaac Brock to polish some of the film's intricacies. Featuring a seamless combination of live-action and stop motion that alternates between stage shots of Modest Mouse and a spiraling dream-like world of ever-shifting landscapes, Whale Song is a stunning representation of the combined capabilities of Nando and Bent. The variety and execution of the VFX portions of the video – from yarn reeling into complex patterns to a guitar that plays with no musician attached – strongly evoke the confused and surreal patterns of one's warped memories. Additional creative touches such as animated and intricate photographic collages and giant CG snails sliding across the band's stage – add variety and depth to the surreal world.

“This new video is the perfect showcase for the benefits of the collaboration between myself and Bent,” noted Costa. “I typically wouldn't have created a film with this much live-action or stop motion, and Bent also wouldn't normally approach a project with such a strong motion graphics influence, which is what I have long specialized in. With such well integrated in-house teams, I can’t imagine that there’s a project out there that we couldn’t pull off.”

One of the challenges in Whale Song was to recreate the contours of an ever changing, disorienting and intriguing series of landscapes. Costa shot the majority of the piece with Bent’s RED One cameras, which came in handy for their 4K capabilities when adding camera movement in post. In order to create the feeling that lead singer/guitarist Isaac Brock was being split up between two competing scenarios of pure reality and his imagination, for example, Costa mounted two of the RED cameras side by side on a custom plate, each with identical lenses set at an angle to simulate a stereoscopic effect.

In another instance, band members that appeared to be standing on the ground were actually hoisted aloft and secured to a fake ground plane, which meant that the stage floor was perpendicular to the ground. This situation intentionally restrained their flexibility and shifted the gravity, adding oddness to their movements.

Costa used a variety of frame rates, ranging from time-lapses at 6 frames per second, to 1000 fps shots from a Phantom camera to give the feeling of variety of speed in the character's memories. Blue screen stages were used extensively to place Isaac against the varying landscapes of mountains, dense forest valleys, and deserts. Bent's CG department was also responsible for creating significant portions of the video's landscapes and scenic elements.

During production, Nando and his team relied solely on a very detailed script containing technical and creative notes, live-action and animation guidelines, with specifications for composting and stop motion, which were all previously defined and polished by the director. “From what I’ve learned, producing a project at Bent is a wonderfully self-contained experience,” noted Costa. “From building intricate props to figuring out complex CG shots, Bent has specialists in all fields. I’ll walk over to the stage for live-action, then back to compositing, load the footage and work from there. It makes the whole process immeasurably easier, and creatively freeing.”

“Seeing this video makes me feel good about what we’ve done here at Bent”, stated Bent EP Ray Di Carlo”. We set out to establish a creative clubhouse atmosphere where talented people like Nando could come to work. I’ve always admired directors who can hold a project’s final vision in their minds eye and are able to let the talents around them do their respective jobs for a projects whose creative whole becomes more than the sum of it’s parts, and that defines Nando. Seeing Nando come in, suddenly doing things that he wasn’t used to doing, and still delivering at a high creative and technical level, means that David, Chel and I were able to create a place where everyone learns others’ disciplines. That’s rare. It’s what we set out to do – what we originally wanted -- but when you see it work, it’s amazing.”

After entering his personal sanctuary, an artist is presented with a hand-crafted drawing tool that assists him in materializing his mental impressions. The machine discharges his thoughts as an endless web of yarn that guides him through his physical thoughts. The story progresses to reveal that he is divided between two worlds, one of dull reality and the second of warped memories. In the process of finding a way out of his consciousness, he is trapped between the two competing spaces, which eventually inflict lethal damage, acting as metaphors to self-destruction.

Behind The Scenes Photographer: Ben Blankenship

- Featured in Stash 61
From the textmex obsessed imagination of William A. Nericcio at 9:39 AM 1 comment: 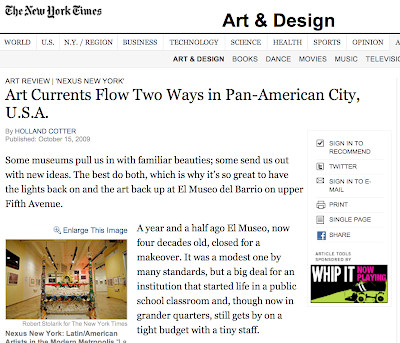 From the textmex obsessed imagination of William A. Nericcio at 6:02 AM No comments: 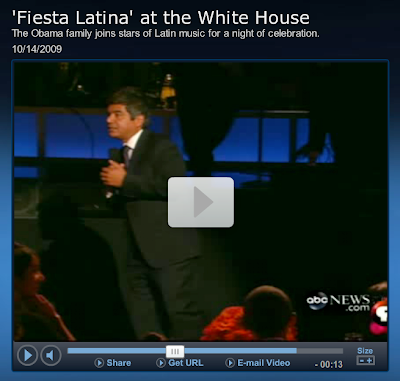 Here's a cool medley LOS LOBOS played for the President and his guests.

From the textmex obsessed imagination of William A. Nericcio at 6:37 PM 1 comment:

Xicanosmosis: The Chicano Wave and Latin Roots on PBS ...the New York Times Weighs In...

Each hourlong segment in the series, produced in association with the BBC, focuses on a particular style, place or time. The first two programs concentrate on Latin jazz and salsa, genres that developed mainly in New York. Part 3, “Chicano Wave,” looks at forms of Mexican-American music that have emerged in the Southwest. The final episode, “Divas and Superstars,” features recent pop-oriented singers and producers mostly out of Miami or New York.

“We make documentaries about American history, and what we wanted to do was place this music as part of a history that we all share,” Ms. Bosch said. “We were trying to find the connections, find uniting factors, so that anybody anywhere in America can look at and identify with this story.”

From the textmex obsessed imagination of William A. Nericcio at 5:28 PM No comments:

From the textmex obsessed imagination of William A. Nericcio at 9:52 AM 1 comment: 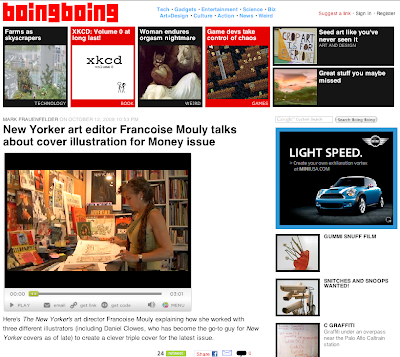 From the textmex obsessed imagination of William A. Nericcio at 4:23 AM No comments:

Rita Hayworth's 'FIRE DOWN BELOW' 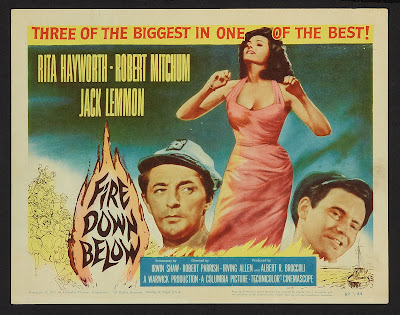 Every time I think I exagerrated in Tex[t]-Mex where I said that Latinas/os are synecdoche's for sexuality, I run across something like this! The sexual semiotics here is worthy of Freud's cigar!
Click the image for a high-res scan; the poster is on auction at Heritage. My birthday is just around the corner, hint, hint!
From the textmex obsessed imagination of William A. Nericcio at 3:49 PM No comments: 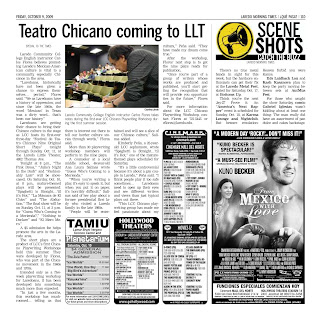 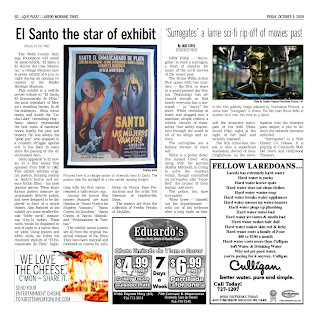 A big tip of the somebrero to Debbie Jacaman, our new Laredo-based correspondent, for sending in updates on the cultural scene en Laredo, Tejas, USA. Hit the images above for the lowdown.
From the textmex obsessed imagination of William A. Nericcio at 9:29 AM No comments: