A quick update to a posting below from 2007 focusing on the talented intellectual/pop-phenom Shakira; it struck me as an atrocity not to showcase her brilliantly xicanosmotic, colombiandesOsmotic, talents here on the galleryblog!

While the Guy Bourdin meets Helmut Newton (meets Robert Palmer channeling Terence Donovan) aesthetic might not be to everyone's taste, the ongoing Ovid-like metamorphoses of Shakira's career are fun to watch! 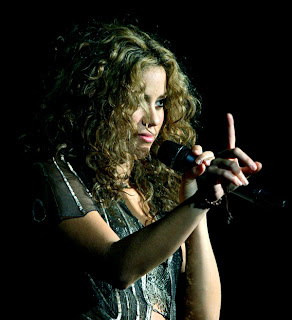 original post 9/14/07
As a whole generation of young women (and young men for that matter) writhe and recoil at the spectacles of Britney Spears, Jessica Simpson, et al--poster-children for a politico-aesthetics of stupidity, mindless vacuity, and corrupt venal narcissism, it is simply breathtaking to witness the quiet, intellectual curiosity of Shakira, aka Shakira Isabel Mebarak Ripoll , revealed in this story on the Associated Press wire. Other venues have documented this Latina's difference from the throng of young starlets all too eager to flash en route to their flash in the pan futures. Given the historic function of Latina bombshells in American mass culture, Ms. Mebarek Ripoll's intellectual wanderlust may rightly be read as performance art with Derridean traces. If you know the Colombian superstar, tell her the MA and MFA programs at SDSU would love to have her! 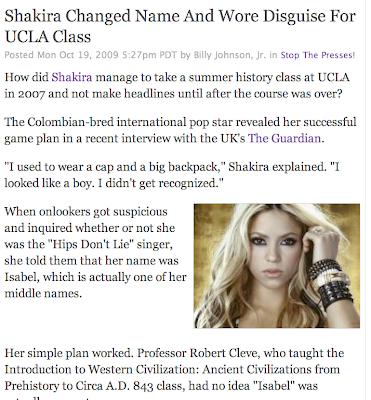 From the textmex obsessed imagination of William A. Nericcio at 9:28 PM