Latina "Bombshell" or Scab!? Eva Longoria Versus the WGA Barricades 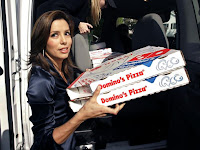 The ghosts of United Farmworkers and shades of MEChistas howled and weeped a couple of weeks back as Tex-Mex, Chicana uberstar Eva Longoria crossed Writers Guild of America picket lines in Hollywood in order shoot scenes for ABC's Desperate Housewives. The Tejana vixen, previously profiled in these pages (1/12/07), and renowned in Ethnic Studies circles for her candid, native-informant outing of Texas-style Mexican on Mexican racism (viz, the "la prieta fea" disclosures), tried to buy the love of her colleagues with pizza but fell short and, in some reports, was brought to tears by the chants of lefty agitators including Julia Louis-Dreyfus--"Elaine," of Seinfeld fame.
From the textmex obsessed imagination of William A. Nericcio at 6:44 AM