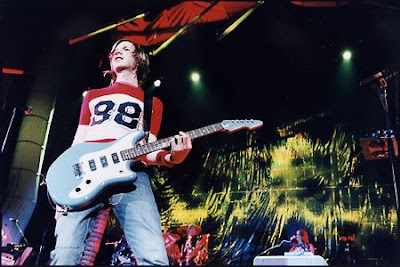 Nobody exposes the vivid syncretism of the SoCal cultural tapestry like Beck. And of all his songs, the one that is nearest and dearest to the heart of XicanOsmosis hunting Chicanos (and to regular music fans as well) is his Qué Onda, Guëro, officially listed as "Qué Onda Guero" on the Guero [sic] CD. I am particularly fond of the wikipedia listing for Guero:

Güero (pron. IPA ['wero] sounds like "Wher-roh" in English) is a Mexican slang term in Spanish for a pale-skinned or blonde-haired person. Beck cites having been referred to as a "guero" throughout his childhood, lending the title of the album and the track "Qué Onda Guero [sic]". (In Mexican slang, ¿Qué honda güero? means "what's up, blond boy?" or "hey, white boy". See List of Chicano Caló words and expressions)

I have looked up and down the internet for an official version of the Qué Onda Guero video to embed here, but it is not to be had; we will have to settle for this "live" version from an MTV special. What's funny or peculiar about this version is to listen to how gringo/gabacho Beck sounds as opposed to the studio released version of the song--all the cholos keeping him honest in the studio must have been sleepin' ésa y éso when Beck stormed onto MTV to perform this version! Still and all, I love the guy--the Bowie of his generation.

If you know where I can find an embeddable version of Qué Onda, Guëro, drop me a line.
From the textmex obsessed imagination of William A. Nericcio at 8:10 PM