"...Izel Vargas has been molested by a television; comics have assaulted him, leaving their inky trace on everything he touches. There’s more: he is a victim of the nefarious workings of xicanosmosis, born between and within the borders of the United States and Mexico, his work shouts of the alchemical magic to be found within and without these bizarre cultural spaces. You look at a work like “Valley Girls Make Me Cry” or a piece like “Things Can Only Go Wrong” and the you can just hear the smarmy gringa/o art historian in the crowd (dub Thurston Howell’s accent from Gilligan’s Island here): “Ahem, ‘smick-smock,’ of course we see the influence of Roy Lichtenstein here.” And said insufferable Art Historian, would be right—but there’s more.

Where Lichtenstein’s comic book inspired paintings evoked a hyper-perfect, hyper-stylized dimension of control and measured cadences, Vargas’s world is much more ephemeral, much more haunted and haunting. Izel Vargas is like some victim of semiotic abuse, the contours of the border have traced his psyche with bizarre hieroglyphs so that when they emerge from his hand onto the canvas, his ciphered scribblings bring back odd voices from the otherside.

Let’s revise the lead here: Vargas Abducted by Aliens (“Illegal,” extra-terrestrial, take your pick). But instead of probing his organs or dissecting his brain, they’ve plunged a syringe into his eyes and like other artists similarly assaulted (Van Gogh comes to mind, Diane Arbus as well), they will never be the same...."

{hit this image, directly below, to read the rest at Izel's amazing site} 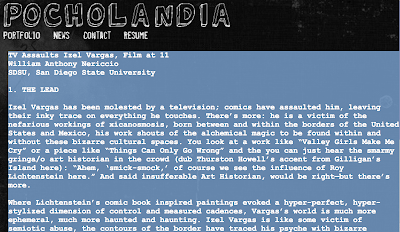 Here's one of his recent works: 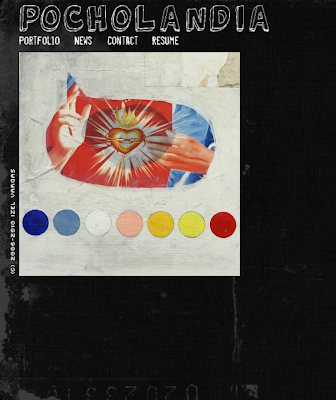 From the textmex obsessed imagination of William A. Nericcio at 4:19 PM