One of our most respected and senior cultural studies gumshoes is in the house! Dr. Marc García-Martínez, from Allan Hancock College's Department of English, writes in with a culinary finding:

Estimado Nericcio—Ok, carnal, you can file this one under “Screwy Saussurean Southwest Semiotics” because here is more visual caca stereotype cut from stone and born of an odd geo-cultural commercial matrimony—literally. 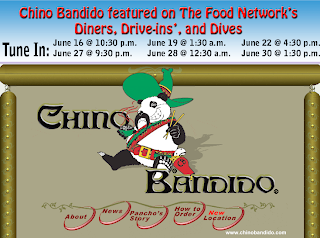 Meet the 'Pancho Panda' mascot-logo from the fine Arizona Chinese-Mexican eatery Chino Bandido Takee-Outee. Check out their website and you will learn that this eatery along with its linguistically-charged twisted and alliterative namesake was established back in 1990 by husband and wife Frank and Evie Collins.The Collins’ share that they were inspired by “Eve’s Chinese background and both [of them] being native Arizonans” to create this nifty blend of Southwest Mexican and “Asian” cooking. Indeed, their website proudly tells the story of the iconic ‘Pancho Panda,’ as not just a mascot-logo but an actual rock statue as well, conceived by Frank & Evie during their travels to T’ainan, China, and blasted off some mountain there and taken back home to the Sunshine State.

Anyway, the rest of the story and the image of ‘Pancho Panda’ pretty much speaks for itself. Sabes que, I am just fascinated and aghast (as usual) by the Yellow River—Rio Grande crossings of geography and culture packed into this seemingly benign little visual stereotype; by the confusion I have as to whether that Frito Bandito signifier on the bear is, in fact, a Fu Manchu mustache or a Pancho Villa big ol' bigote?Either way, Billy, if you are ever driving through Phoenix or Chandler, AZ, stop by an take a photo or two of ‘Pancho Panda’…and pick me up a Szechuan hot tamale with Hunan duck and frijoles. ¡Orale!

From the textmex obsessed imagination of William A. Nericcio at 6:16 PM