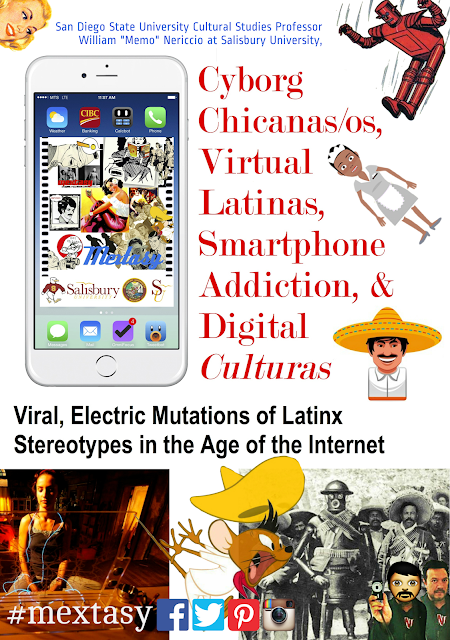 As part of SU’s celebration of Hispanic Heritage Month, William "Memo" Nericcio, Professor of English & Comparative Literature at San Diego State University and director of their pathbreaking MALAS Program (the Master of Arts in Liberal Arts and Sciences), will deliver a lecture entitled “Cyborg Chicanos, Virtual Latinas, Smartphone Addiction, and Digital Culturas: Viral, Electric Mutations of Latinx Stereotypes in the Age of the Internet. ”

Before the talk, the public is invited to view his pop-up art exhibit Mextasy: Seductive Hallucinations of Latina/o Mannequins Prowling the American Unconscious, which further explores some of same themes as his talk, on display in the Wicomico Room from 4:00 PM until the end of the lecture. The talk and exhibit are sponsored by the Office of Student Affairs, the SU Department of English, SU Galleries, and the Fulton Public Humanities Program. Among his other roles at SDSU, Nericcio works as lead faculty the NEH-supported Digital Humanities Initiative and also directs SDSU Press. Previously, he was an Assistant Professor of English at the University of Connecticut from 1988 to 1991. He holds an MA and PhD in Comparative Literature from Cornell University where he worked as Mexican writer Carlos Fuentes's Graduate Research Assistant, hung out at parties with Edward Said, Jurgen Habermas, Gayatri Spivak, and Jacques Derrida (and worked with them in seminar as well). A Mexican-Sicilian-American and an innovative troublemaker, Nericcio was born in Laredo, Texas, along the Rio Grande River in South Texas.

*Location: Academic Commons, Assembly Hall*
From the textmex obsessed imagination of William A. Nericcio at 2:31 PM