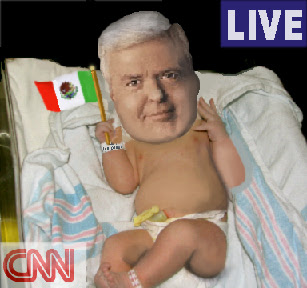 Once before, the Tex[t]-Mex Galleryblog has had words with prolix and peculiar CNN talkinghead Lou Dobbs, whose views on immigration give the terms shrill and paranoia new depth. Others are on his expansive tail as well!! Hence this link to a May 2007 story at loco Lalo Alcaraz's pocho.com where the Mad Hatter of Chicano comedy has cooked up a scheme to upset the Lou Dobbs juggernaut CNN is hot on the trail of the story! No joke! Be sure to check out pocho.tv as well! The official press release for the contest is here. The philosophy guiding Alcaraz's enterprise is bracing:

"It is the Pocho Hour of Power's contention that today's modern immigrant is assimilation minded and generally eager to please. Today's undocumented immigrant is the uninformed American of tomorrow. Americans have a great tradition of naming their offspring after public figures, like John Wayne, Ronald Reagan and Archie Bunker. What could be more patriotic than naming your baby after a beloved American bigot?"

From the textmex obsessed imagination of William A. Nericcio at 8:23 AM