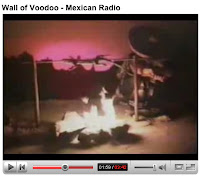 In 1983, Wall of Voodoo came out with an early MTV video classic directed by Francis Delia that helped define a generation of music video. Seen through the lens of Tex[t]-Mex, however, this incipient contribution to what became the dominant form of music marketing plays the same role Griffith's Birth of a Nation played for cinema last century. Just a thought.

See it and judge for yourself!

From the textmex obsessed imagination of William A. Nericcio at 8:23 AM