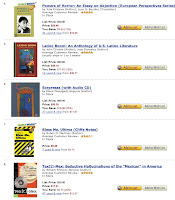 Perusing the rankings of Amazon.com is a dangerous thing for a sensitive author! This morning I was floored to see that Tex[t]-Mex: Seductive Hallucination of the "Mexican" in America was #8 in the category" they call "Hispanic" and 20th in the "Hispanic-American" category.

I was floored. Thrilled!

Floored and thrilled, that is, that I saw my bestselling title was one click BEHIND the Bless Me Ultima Cliffs Notes on the "Hispanic" list, and that Julia Kristeva, noted Chicana (not!), was hanging out there as well. At Cornell in the 80s, just 5 years after I was tooling around Laredo streets in my Mama's green Pacer, I thrilled to the French riffs of Kristeva, speculum-wielding Luce Irigaray, and others, make no mistake about that. That said, Chicanadom can't claim her as its own and though the Nixon-administration-spawned term "Hispanic" is inclusive, I think tossing in Frenchy-pomo-Freudians is taking it a bit far.

The Bless Me Ultima Cliffs Notes trumping TextMex are punishment, no doubt, for my infamous review of talented seer Anaya's peculiar Jalamanta.

However, the Cliffs Notes prove the thesis of that review: when Chicana/o fiction has Cliffs Notes, we've reached the moment when essentialist cheerleading is over and true criticism can begin.
From the textmex obsessed imagination of William A. Nericcio at 7:13 AM