Source for my new logo! Scubamex, the wonderdog!

Here's the rest of the skinny on this cool early Monday Morning Cinco de Mayo gig at Mesa College with former TSP rat pack scribe Tommy Riley--but before that, and to my "friends" y carnales before they ask, NO, repeat NO, I am not pointing to my receding hairline in the promotional image here: 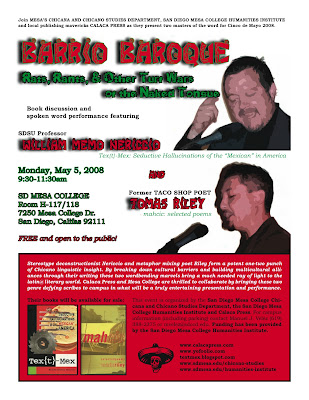 Here's an alternate pose! No worries Beltrán--vanity made me do it. 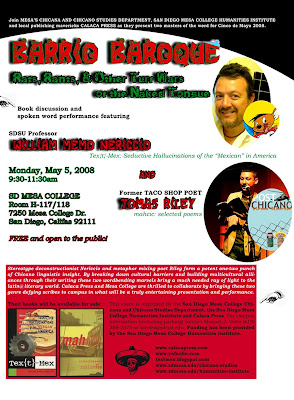 Riley and I will be selling and signing copies of our books right after the gig--drop by and give us a shout out!!! 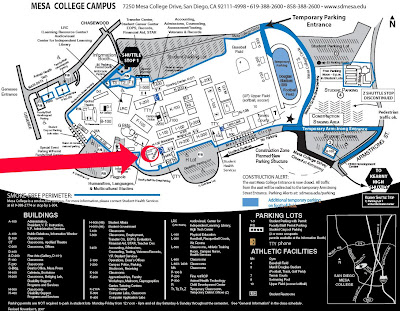 FREE and open to the public!

Stereotype deconstructionist Nericcio and metaphor mixing poet Riley form a potent one-two punch of Chicano linguistic insight. By breaking down cultural barriers and building multicultural alliances through their writing these two wordbending marvels bring a much needed ray of light to the latin literary world. Calaca Press and Mesa College are thrilled to collaborate by bringing these two genre defying scribes to campus in what will be a truly entertaining presentation and performance.

Their books: Tex{t}-Mex: Seductive Hallucinations of the "Mexican" in America and mahcic: selected poems will be available for sale.

Praise for Nericcio and Riley:

"[Text-Mex] is the closest Latin@ studies has come to a revolutionary vision of how American culture works through its image machines, a vision that cuts through to the roots of the U.S. propaganda archive on Mexican, Tex-Mex, Latino, Chicano/a humanity. Nericcio exposes, deciphers, historicizes, and ’cuts-up’ the postcards, movies, captions, poems, and adverts that plaster dehumanization (he calls them ’miscegenated semantic oddities’) through our brains."

"mahcic gets you open on Riley’s music. A poet who writes like a master DJ: scratching metaphor, mixing cultures and re-mixing themes until he infiltrates your consciousness and makes you recall the gloss before the glitter while warning you about the wind before the storm."

-- Willie Perdomo, author of Where a Nickel Costs a Dime

Tomás Riley is a poet, writer, educator and a veteran of the seminal San Diego based Chicano spoken-word collective The Taco Shop Poets. His self-released CD Message From the New Forreal debuted in 2003 and his book mahcic: selected poems was published in 2005 by Calaca Press.

From the textmex obsessed imagination of William A. Nericcio at 11:42 PM