Jim Rowader!! (Half) Son of Puerto Rico! Friend of Diversity! Mammoth Tool! or the New Face of Anti-Union Fascism | via GAWKER 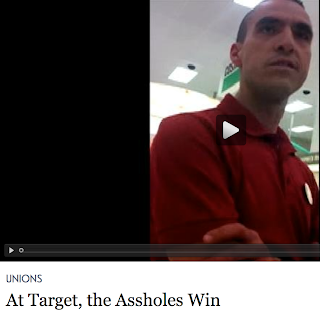 Tex[t]-Mex Galleryblog inmates! Please take the time to carefully peruse and listen to the video you'll greet if you hit the Rowader-TOOL-link image to your right; amazing stuff..... the most peculiar is how Target's head union-buster uses "diversity" as a weapon to try and silence the affable gringo filming him. Yes, this wanna-be-SS-anti-labor rogue uses his Boriqua pedigree to silence his ruffian-caucasian video nemesis!   It doesn't work! But it is fun to witness: strategic essentialism, right-of-right estilo!

The low-angle POV of the shot echoes Touch of Evil..... get it? Target union busting--EVIL.

Ha. You'd laugh, of course, if you didn't already know that Target won the battle against union organizers the other day....

2nd update: hit the image for an earlier Gawker story: 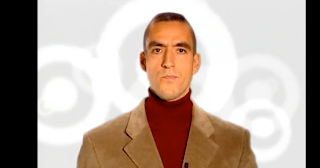 From the textmex obsessed imagination of Memo Nericcio at 3:45 PM